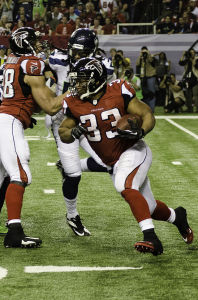 Richard Lutz watches the big beasts of the NFL at Wembley. And wonders….

So, the big guns of the National Football League (aka American football to anyone besides Stateside readers) say they can see a franchise in London within five years. It could be worth more than £100 million annually to the city. Hmmmmm.

I think so. But I’m not too sure. So, off to Wembley to find out a bit more.

The Atlanta Falcons are playing the Detroit Lions. The famous stadium is rammed – 83,000 in the stands. It is a strange affair. We are in America here. But not in America.

It seems that either the NFL or the TV stations have decided that the hapless Falcons (2-5 on the season, so far) are the home team (you gotta have a home team to cheer on) and the Lions (5-2) are the enemy, the strangers, the horde to be turned back.

This meant that all marketing for the eager crowd was slanted to the Atlanta team, regardless that Londoners couldn’t pin that city on a map, no less locate the state Atlanta is in. On the tube to Wembley, the mass of fans were bedecked with Falcon tee sh-rts, jerseys, parphernalia, little decals on their cheeks or foreheads. They carried Falcon banners as if intuitively aware who to support, who to fear, in this Wembley clash. They were told by powers unknown.

Inside, the marketing rolled on. Each seat had a Falcon flag to wave and was covered with a Falcon plastic bag (not sure why). And on the huge digi-screens behind the goals, loads of Falcon stats and not a scintilla of a detail for the Lions. We were in America, we were in Atlanta. We were not in London.

There was no time for a sensory vacuum at this game either. The big noise of bland mid-American heavy rock bombarded the stadium, Falcon cheerleaders popped up and down and athletes on Oscar Pestorius blade runners bounced and even back-flipped in front of the crowd. Below them ranged the Falcon mascots in big furry costumes. There was no silence, no let up. You can’t let 83,000 remain inactive, un-entertained. It is bad for business. Bad for TV.

Suddenly, the stats disappeared and the Falcons team video roared across the big screen. Samuel Jackson’s face loomed large above us amid smoke and told us to: “Rise Up. Rise Up.”

For whom? Against what? And why?

“Sport and entertainment have combined. No one is sure where it’s going…”

Then the Falcons appeared and ran through smoke flares to the roar of the newly minted home crowd, each athlete announced and instantly diefied and re-identified on the two big screens. A bit later, the visitors, the Lions, quietly emerged. To no hoopla, no identification.

The Falcons WERE. The Lions WEREN’T.

Jackson’s Big Brother tirade continued. Rise Up, rise up, he hectored, as a phalanx of dogsbodies ran around the green field carrying gargantuan Falcon banners. They waved in the breeze. On the deep crimson cloth were emblazoned the angular angry Falcon-heads, similar to…to…unfortunately… a Nazi swastika flag.

Wembley had been transformed into a Nuremberg Rally. 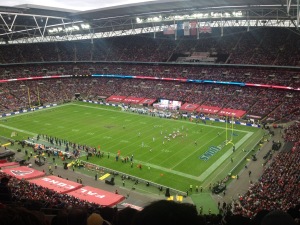 And the 83,000 baying crowd into an audience, a willing audience too, of a saliva-dripping crypto-fascist bunfight. Without even realising it.

My cousin Eric gave me a strange look. I returned it as the crowds roared on, encouraged by Big Brother Jackson, hypnotised by the deep red flags and the constant sensory mindlessness around us. Told to Rise Up, told to stand and cheer the flag, to roar on a home team that was foreign, unknown, to most of us.

I could not understand it. I could understand, of course, a big crowd loving Spurs, the Villa or even (god bless ‘em) Stenhousemuir or Kidderminster Harriers. But the Atlanta Falcons? Who, until 24 hours previously, no one had ever heard of.

Maybe it was because the mass crowd had been ‘told’ to love the Falcons. It was not so much sport as interactive entertainment with that bloody touch of cryptofascism.

Sociology professor Ron Vannelli explained to me later: “Sport and entertainment have combined in some form. And no one is sure where it is going.”

But going it is. If the NFL truly does come to these shores, and I really doubt it despite the big Wembley crowds, it will transform British football (aka soccer). Want simple, brash, head-on team clashes peopled by millionaires? Maybe the FA is your cup of arsenic.

Want to be bombarded and told to enjoy yourself as you watch another group of athletic millionaires? Stick to the NFL and, please, remember to Rise Up. To where, and from what, no one is sure.

But just do as you’re told.