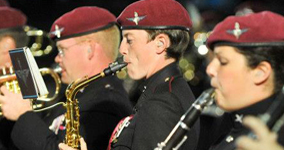 On Wednesday 5th November, Birmingham’s commuters will arrive to work in a city full of music, uniforms and the smiles of volunteers, all collecting for this year’s Poppy Appeal. Birmingham Poppy Day is the chance for everyone to join together to express their support for the soldiers, sailors and airmen who, with their families, work to keep us safe.

Following on the theme of the First World War commemorations, step carefully when you cross Victoria Square as the recruiting station there will soon have you signed up to fight in the trenches. At 11am, heralded by the trumpets of the Royal Signals, the Lord Mayor, Councillor Shafique Shah, will be measured up for his uniform and afterwards the Sikh Dohl drummers will change the mood in square while bands continue to play around the city.

Victoria Square will be the setting for other lively events during the day while more poignantly, across in Centenary Square, there will be a chance to light a candle for Remembrance. As The Royal British Legion moves forward post Afghanistan, we will look back and remember the fallen and be very aware of the future for those who have left the military as well as those who continue to serve our country.

Players from Birmingham City Football Club will be seeing how long they can keepyuppy in Victoria Square after 2pm and giving a boost to the office raids later in the day will be well-known comedian, Paul Foot, star of 8 out of 10 Cats and Never Mind the Buzzcocks. The teams will be hot footing around Brindley Place pressing doorbells and visiting companies supporting the campaign.

All together there will be five military bands plus around 150 soldiers, sailors, airmen joined by cadets, students and volunteers from business in Birmingham and the Midlands. Together they will form an army of around 250 volunteers who will be collecting for the Poppy Appeal throughout the city. This will be a boost to the regular volunteers and collectors who will continue to collect during the whole Poppy Appeal period.

Collectors and bands will be at the railway stations; New Street, Snow Hill, Moor Street and Birmingham International and Birmingham Airport, the Queen Elizabeth Hospital and at bus stops. In the city from Colmore Square through to Victoria Square and surrounding streets, at New Street Station and around the Bullring, in Centenary Square, Brindley Place and at businesses in Birmingham City centre.

The Poppy Appeal is the nation’s largest and most loved fundraising campaign in support of our Armed Forces and this year, The Royal British Legion is aiming to raise £40 million during the Appeal.Every poppy helps us to support the British Armed Forces past and present, and their families, by contributing towards the £1.4 million needed by the Legion each week to deliver direct, practical care and support to the service community. Last year The Royal British Legion answered more than 200,000 calls for help from the Armed Forces community.