Athletes from across Commonwealth shine light on startling threat of climate change.

The Commonwealth Games which has just ended has, aaprt from being hailed as the most succesful ever, put the spotlight on countries around the world which face the brunt of climate change impacts, from cyclones to wildfires.

At least two athletes from Kiribati – an archipelago that could be entirely under water in 30-40 years – claim inspiration from retired weightlifter David Katoatau, whose trademark dancing after each lift at the Rio Olympics helped raise awareness of the islands’ plight.

Lataisi Mwea, who raced in the 100m in Birmingham, has taken on Katoatau’s campaigning mantle.

“Our water supply will become limited, our diet will lack the necessary requirements as we will not be able to grow our crops anymore, we won’t be able to train with the burning heat of the sun,” Mwea warned about the imminent threat of climate change to Kiribati life.

“I need to make my name and hope that people see what we’re going through, and help us”.

Katoatau’s brother Ruben, also a weightlifter, came sixth in the men’s 67kg division. “I really love weightlifting because I just want to do everything for my country,” he said.

Network co-ordinator for Kiribati Climate Action Network Pelenise Afo said: “The message for our athletes is really about resiliency – how to help our people and athletes in the face of climate change. We’re not talking about migration. We will protect and save Kiribati”.

“The resiliency is not just about to be alive,” she added. “We’ve been dependent on imported food for 40 years. We’re teaching our people smart agriculture, to eat good food. We have a lot of idle lands and these need to be planted”.

Alfredo Junior of Mozambique’s National Olympic Committee says cyclones Idai and Kenneth within just weeks of each other in 2019 destroyed sports facilities in the centre and north of the country. In many cases, he says, like the arena in the city of Beira, “we are still waiting for funds to rebuild”. 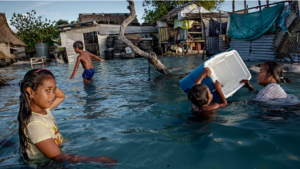 Junior appeals for outside support for Mozambique’s reconstruction, and for people in the West to be more conscious of the effects of burning fossil fuels. “We are suffering because there are many countries who don’t observe the right ways,” he says.

Seychelles table tennis player Mick Crea’s grandmother is one of many residents in the island nation who has moved her house uphill because of coastal erosion. “That cost money,” says Crea. “Or you can build walls – but this is not a good option because we have beautiful beaches”.

President of the Ghanaian Table Tennis Association Mawuko Afadzinu says he’s noticed the change in sea levels when out jogging.

“When we move to the space for outdoor training, there’s so much more unpredictability,” Afadzinu says. “We need to change the schedules because of what the weather patterns are going to be”.

Eleanor Terrelonge of the Jamaica Climate Change Youth Council feels the link between sport and climate isn’t being made by her athletics-loving compatriots, and wants to see Jamaican sprinters starting these conversations. “People need to be aware of the timeline. We’ve got a very small window to enact change,” she says.

Raphael Mulenga, General Secretary of Zambia’s National Sports Council says: “It’s the people of the global village that are going to make a difference. “Not matter how small [an action] it contributes to the bigger picture”.

Australian race walker Rhydian Cowley, who came eight in Sunday’s 10km event, says that along with lots of other Aussie athletes it was the 2019-20 Black Summer bush fires that “set my alarm bells ringing”.

At his home in Victoria State, he has changed his gas hob to an induction stove, has got some solar panels, and changed his pension arrangements to avoid investments in fossil fuels. He offsets carbon emissions he can’t avoid, such as those associated with flying to competitions. While conscious of the limits of offsetting for helping the planet, he adds that it’s important people don’t feel guilty about not being able to reduce all their carbon emissions to zero.

He suggests campaigners should be getting people to think about what want politicians and business to do – “using big levers of government is important”. For inspiring climate action by others, “it almost doesn’t matter what you’re talking about as long as it’s part of conversation,” he says.

He thinks his own sport has a particular appeal as “the most accessible form of exercise: you don’t have to be running at a [Eliud] Kipchoge pace. Walking around, connecting to the environment is important”.