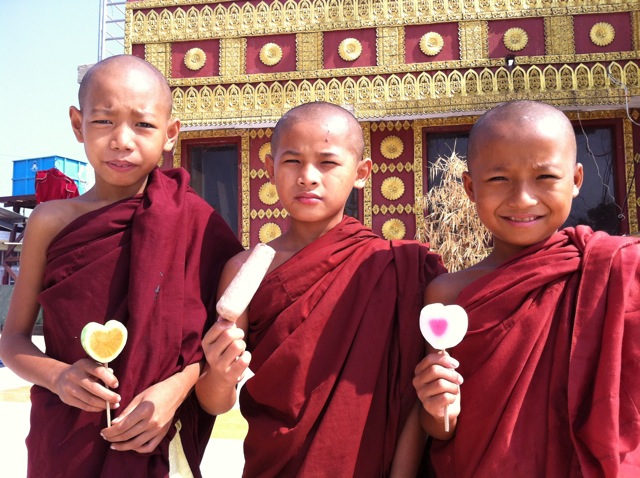 Tourism is burgeoning in Burma  since   Aung San Suu Kyi  gave foreign visitors her blessing. Sheilagh Matheson has  returned from a  month’s trip, travelling by bike, boat, bus, tut-tut, rickshaw, train and Honda 50. She spoke to three people who are staking their futures on the tourist industry.

British tour companies are swamped with demand, and it isn’t from low budget back-packing adventurers. Glancing around Yangon International Airport -half the size of  Newcastle Airport-  you could forgive the Burmese for thinking most of Western Europe is peopled with affluent pensioners in Rohan outfits.

Part of the attraction is that the smiling, shy Burmese people generally still seem innocent, uncontaminated by the lucrative tourist traffic. There are few beggars, little hassle from souvenir sellers, no sullen resentment and tipping still isn’t the norm. They do not see us as money on legs – at least, not yet.

But they are desperate to develop tourism. Individuals  and multinational corporations alike want to make the most of their opportunities.

29 year old Wai Lwin Lwin is a very unusual woman. A Muslim living with a Buddhist boyfriend, she has cropped hair, European clothes and good English. But what really marks her out from the crowd is her burning business ambition. 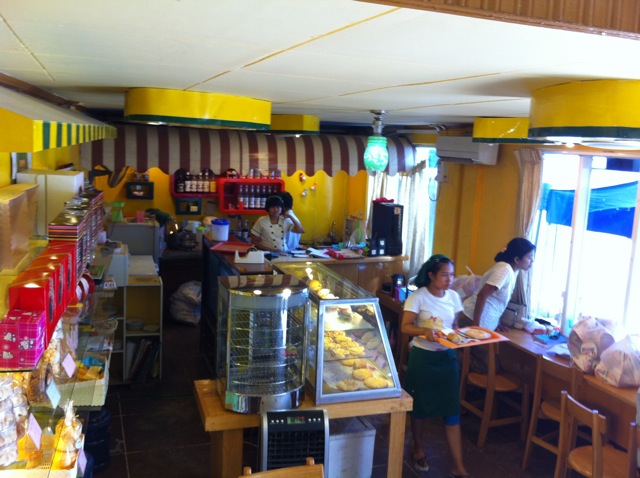 She opened a café called Delifrance 3 years ago to cater for the rapid influx of tourists discovering Burma. It is a haven for hot and bothered travelers who can relax in the café watching sunset over the Salween River estuary in Mawlawyine, 300 kilometres southeast of Yangon.

“I am not a lazy girl,” she says. “ I’m always thinking what I can do, how to improve the business. My ambition is to be a rich, famous businesswoman with my coffee and cake shop.

“But we are not a developed country and we are still trying to stabilise. Most people now have hopes that we have a future and we can change step by step.”

Wai Lwin Lwin is trying to do that by giving foreigners what she thinks they want – air-conditioning, jazzy yellow decor and a rack of bottles of spirits behind the expresso machine. The food looks exactly what you might crave after a month of Shan noodles or vegetable fried rice – pizza, sausage rolls, pasties (disappointingly, they taste nothing like a Greggs pasty), and chocolate cake.

She works full time for a pharmaceutical company as well as running the café, so her working day begins at 7.30am, followed by a full day at the office, then she’s back behind the counter until 10pm, 6 days a week. She has trained the staff to make European style snacks and the 12 girls working for her are paid $3-$5 dollars a day, an average rate in this country.

Her cafe  is a stone’s throw from the Breeze backpackers hostel and half a mile from the newest, smartest hotel, both booked up by clientele who might descend on her after a sweltering, dusty journey from the nearest pagoda.

Breeze has reached the pinnacle of promotional fame – a mention in the Lonely Planet guide. That’s exactly what Wai Lwin Lwin needs to bring in the right trade.

Than  Lwin, 55, decided to change direction in life before it was too late. He owns a mango and orange farm in Kalaw, a former colonial hill station south of Mandalay near Lake Inle. But fruit farming is precarious, so he sank his life savings into a new venture, the Green Haven Hotel . He deliberately designed it like an Edwardian English country house to attract British and American tourists. 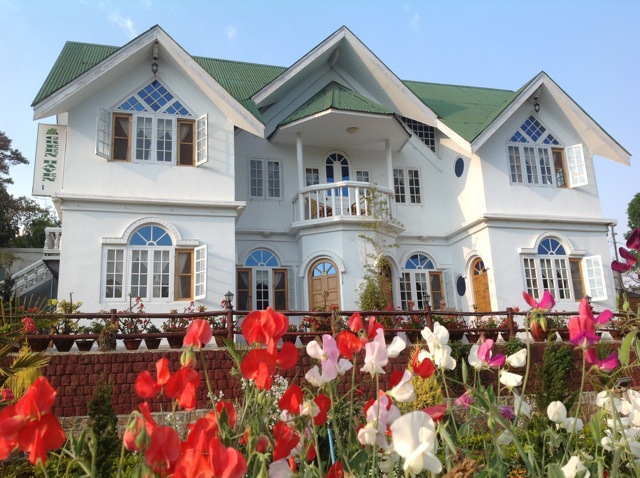 “I am looking to my future, my old age,” says Than Lwin, sitting in the hotel grounds which look like an English country garden with sweet peas, marigolds and roses. “I hope this will be more secure than farming. Every year we have at least 50% more visitors and I’m happy with the business so far.”

It costs $40-$50 dollars B&B to stay in the 20 room hotel and he is fully booked for at least 15 days every month. Most visitors are French, UK, USA, German and a few Japanese. 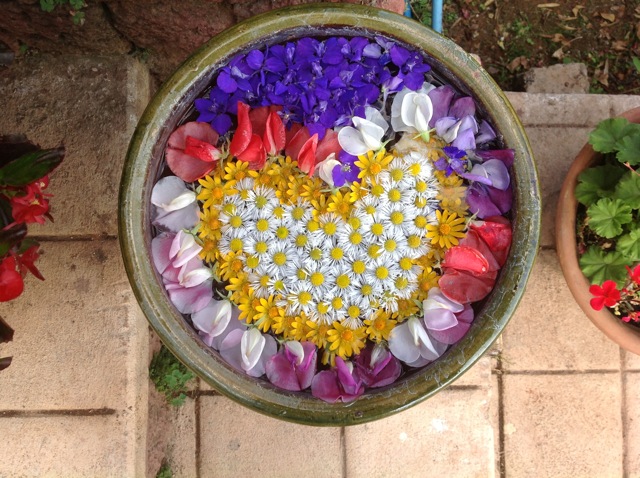 When Than Lwin discovered I hadn’t time to look round Kalaw, he cheerfully took me on a tour on the back of his motorbike to see the Bamboo Pagoda, the old colonial houses, the market and railway station, the hilltop monastery overlooking the town at sunset. My offer to pay him was waved away as he smiled that he was glad we were visiting his country.

Prabhath Wickramasinghe has moved from Sri Lanka to be Deputy Manager of the Mountain Top  Hotel in Golden Rock, a pilgrimage site for Buddhists mostly from China, Thailand, Japan and Burma. All the year round, thousands flock here to pay their respects to Buddha and plaster a precariously balanced rock with tiny squares of gold leaf. Nowadays, tourists mingle with devotees, monks and ethnic groups in traditional costume.

The Mountain Top Hotel is in a prime position in Golden Rock and there are 3 ways to reach it. The first and most common is by clinging on to a packed open top truck that splutters round hairpin bends, then staggering by foot up the last tortuous, uphill stretch. Spindly male and female porters heave suitcases into wicker baskets and carry them up, bent double, while we sweatily and shamefaced follow behind, step by step, for about an hour. 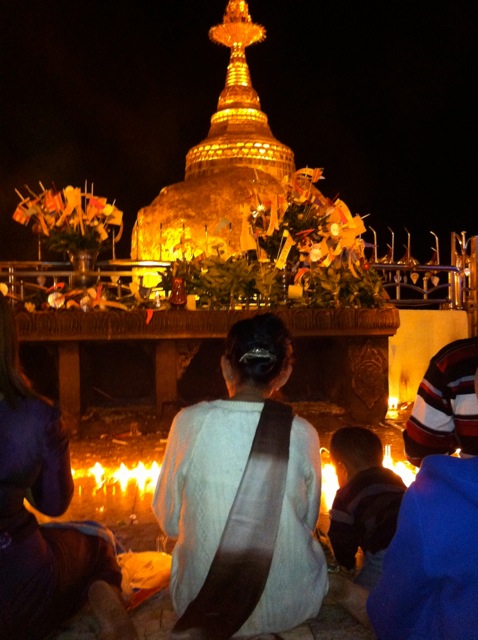 Alternatively, if you can leave your scruples behind, you could pay four men to carry you up in a sedan chair.

Finally, the privileged few might descend on one of the two helicopter landing pads we found just behind the highest pagoda.

The Mountain Top Hotel is usually fully booked, but the owners have brought in a Sri Lankan management team to introduce 21st century standards. They plan to build an exclusive wing and another 80 deluxe rooms for the influx of visitors.

Rooms cost between $65 standard -$120 deluxe. But next year, only local guides will occupy the standard rooms. Demand is so high that they expect to be fully booked with only deluxe paying customers.

“There is a huge increase in the number of British and American tourists,” says Prabhath Wickramasinghe. “All can afford the deluxe rates, but we have to match our service with the cost.”

He can’t speak any of the many ethnic languages or Burmese, so English is the uniting tongue for the staff. Every morning he asks them to translate paragraphs of the local newspaper into English and if they get it wrong they have to write out lines. Old fashioned teaching for modern ambitions, but most of the waiters and receptionists are graduates who think this is a career with prospects.

Burma is still very much a 3rd world country and that is part of its charm. Visitors may celebrate the lack of Starbucks, McDonalds, or M&S. They may accept that even the best hotels have a quirky electricity supply, coffee sachets and powdered milk but no kettle in the rooms. Burmese deluxe is the equivalent of three star in other countries.

But the computer services and phones don’t work, main roads are often crumbling, planes have a bad reputation and trains are the slowest and bounciest in the world. The political climate is fragile – only this week the USA advised travellers to stay away from Mandalay, the second biggest city and tourist destination. Huge tracts of the country are still sealed off and travel is restricted to limited tourist destinations.

Many Burmese, like Wai Lwin Lwin and Than Lwin,  see tourism as their salvation, and travel agencies exhort us to hurry to Burma before it changes. But without the infrastructure and stability, they may well have to wait a very long time before their ambitions are realised.

One thought on “Biking Through Burma: High Hopes, Doubtful Prospects”