Coventry School of Art and Design kick started its annual Degree Show at the weekend with a game of human pinball in the city centre’s Broadgate Square. 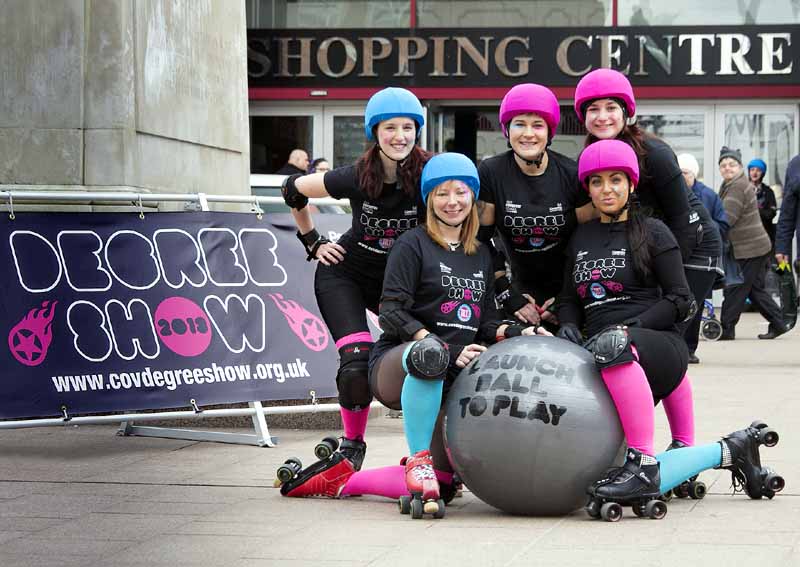 Students and staff from the University surprised onlookers in the city centre with a giant inflatable pinball which formed part of a special musical performance by the city’s all female roller derby team, the Coventry City Derby Dolls.

Unsuspecting Saturday shoppers enjoyed impromptu dance routines by the Dolls who skated to the sounds of Elton John’s version of ‘Pinball Wizard’ from the 1975 hit rock opera ‘Tommy’. The Dolls also gave roller derby demos and Free Radio’s Street Stars provided the music, which all made for a great party atmosphere.

The celebration marked the launch of art and design students’ Degree Show 2013, which is set to exhibit the original work of the UK’s next generation of creative talent over several weeks at various city venues from Thursday 25th April.

Final year undergraduates in visual arts, design, music, fashion, dance, drama, media production and photography will be showcasing their work to the public at different locations across the city centre campus and at selected venues in London.

Everything from theatre productions and short films to cutting edge low carbon transport design solutions will be on show, alongside photography exhibitions and fashion shows.

A special app in the form of a pinball game has also been created to celebrate the launch of the Degree Show and is available to download from the App Store.

The dates and locations of each exhibition are as follows:

Further information on Coventry School of Art and Design’s Degree Show 2013 can be found at the dedicated website – www.covdegreeshow.org.uk.