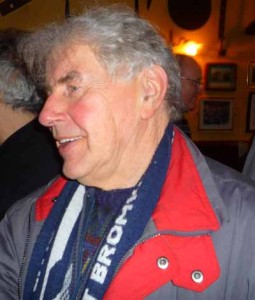 Help – I don’t know the home address of Mr Mike Jones, the referee at the centre of the Arsenal versus Albion game, and I somehow doubt that even Arsene Wenger knows it. But looking at the hapless, dreadful, shocking, performance he displayed in virtually gift wrapping three points to the Emirates boss I do expect his Christmas card list will be increased by a minimum of two – one from Mr Wenger himself and the other from Santi Cazoria, both bearing messages of a similar nature; “Thank you for your early Christmas presents, they were much needed and gratefully appreciated”

Every football fan has seen them thanks to the all-seeing television cameras, and they, together with every media reporter, aptly summed them up as being ludicrous. The first was as blatant a dive as ever executed by Tom Daley, while the second should have been a free kick to the Baggies when Goran Popov was pushed in the back before the award. But hey , he did see one ‘dive’ when Marcus Rosenberg thought he’d get in on the act with what is delicately termed simulation (instead of attempting to cheat a referee_. That was bad enough but why no spot kick for Albion courtesy of a blatant hand ball? Probably because it was a red, and not a blue and white shirt committing the ‘felony’.

Not that it was just the two penalties that gifted Arsenal the three points. Albion did their best to help by showing a total lack of what is termed Fire Power and looking incapable of seriously troubling the ‘Gunners’ keeper. So the losing streak has increased to three and without a return to something resembling the early season form could be extended even further.

The turn of year is approaching and with it a series of games that could well determine whether Steve Clarke’s team remain among those striving for a European place or one knowing their limitations as being a comfortable middle of the table Greed League team. Next up, West Ham United at the Hawthorns for one of those awful 4-00 o’clock Sunday kick-offs. Three points? I hope so but if not the pressure will steadily grow, game by game on the Barclays Manager of the Month for November.

Congratulations Steve and “Come on you Baggies”

PS. Just thought of an address to ensure that Mike Jones receives any Christmas cards, courtesy of the Post Office personnel. They can apparently locate anyone even though the address is vague and incomplete