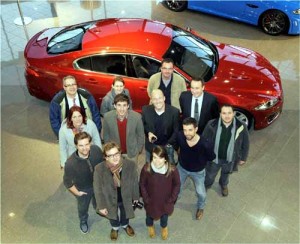 With a combined readership of 4.8 million people for their print editions alone, the journalists took part in a tour to six organisations across the West Midlands, arranged by UK Trade & Investment (UKTI) and local inward investment programme Business Birmingham. The titles that took part included Le Monde (France), Kurier (Austria), and El Mundo (Spain) – with other journalists visiting from Portugal, Belgium, Estonia, Norway, the Czech Republic and Italy.

Wouter Schuitemaker, Investment Director at Business Birmingham, said: “To attract inward investment, part of Business Birmingham’s remit is to promote the region internationally through press coverage. The high-profile titles we hosted with UKTI are read by business leaders, senior management and automotive experts – so by working with local partners to highlight the region’s strengths, we are directly reaching the people who decide where their businesses invest in the future.”

Grant McPherson, Operations Director at Jaguar Land Rover, commented: “By taking part in this media visit, we are helping to showcase the region’s incredibly strong automotive industry, its history of innovation and skilled workforce to a wide international audience. During a difficult economic climate, it is crucial for the local business community to shout about its success – particularly as the West Midlands is supporting the revival of the national automotive sector.”

The UK has become the second largest new car market in Europe after Germany, growing to overtake France in November 2012, according to the Society of Motor Manufacturers and Traders. The automotive sector in the West Midlands employs more than 100,000 people – and the Greater Birmingham area alone produces 600,000 new vehicles each year.*

Stephen Gray, Head of Account Management at UKTI, added: “The current growth and engineering expertise of the UK automotive industry is bucking the trend elsewhere in Europe, and is attracting considerable investment from foreign owned companies. The strong success of the sector in the Midlands is an important part of this growth.”