Robin Clarke has been watching the news unfold over the last few days and smells the stink of hypocrisy. 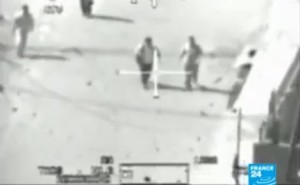 I should first state that in criticising Obama I am not engaging in a “taking sides” exercise such as to mean I must be a supporter of Hamas, al-Qaeda, the Taliban, or even the Ayatollahs in Iran.  I consider the “my enemy’s enemy is my friend” principle to be a simplemindedness best left to fools – in my experience all governments are evil, even though absence of any (effective) government is even worse, much worse.

This week we are witnessing the great compassion that President Obama apparently has, as shown by his tearfulness in the aftermath of shooting of 20 people in the US.  You will also note the huge amount of fuss that such media as the BBC and the Guardian are making about that event.  You’d think nothing [else?] of importance has happened for several days.

A clue that something may not be entirely as it seems may be gleaned from a comparison with the very casual murders that were leaked by Wikileaks with the assistance of Private Bradley Manning.  The key document that Manning exposed was a video taken from a US military helicopter over Baghdad, showing civilians being murdered by a helicopter crewman (who was under no danger himself).  For some reason you may not have noticed that video being pored over on national TV.

As Julian Assange very honestly stated, the video’s first spate of shooting could just about be understood as an error, mistaking a journalist’s equipment for a weapon.  But the follow-up, firing at the people who came to rescue them, could not in any way be attributed to error.  It was a clear case of cold-blooded murder by a government-authorised gunman using government-authorised weapons .

It just so happened that one of the people murdered was a Reuters journalist, with the result that that case became a matter of complaint.  There is good reason to believe that a great many similar incidents of murder were committed by US helicopter crews over Baghdad but just did not get to be publicised at all.

Now consider what has been the reaction of the “compassionate” Obama in respect of these other murders.  The whistleblower Manning himself has been treated as worse than a criminal, has been locked up for more than two years without trial (in violation of US laws) and subjected to severe mistreatment amounting to torture.  And yet Obama himself has recently declared that he finds that treatment of Manning to be acceptable.  Meanwhile in the same Obama-land there has been set up a grand jury with a view to getting Julian Assange locked up forever too.  And meanwhile the actual murderers have not been subject to any sanction.

How much fuss have the BBC or Guardian been making about this other shooting spree?  Well, the Guardian, bless them, have been having a series of features consistently dwelling on what a negative and defective character Mr Assange supposedly is.  The BBC don’t even bother to mention the subject.

A stupid comment is being aired on the BBC these last few hours:  “Guns have only one purpose”.  In reality they have two purposes.  Some people have them in order to attack and threaten people, in support of crime. But many others have them to deter such attackers and threateners, to deter crime and thereby keep the peace.

The reason Obama is getting so weepy about these massacre sprees is that those guns are not under his command.  Governments would be much, much happier if they had the monopoly of violence that is their right.  Because unlike lone maniacs, governments always use their weapons very ethically, such as in routinely murdering civilians over Baghdad, murdering whole cities of Japanese with the latest nukes, or burning to death hundreds of thousands of women and children in German cities once upon a time.  Or as our hero Churchill once suggested, why not just gas those pesky Iranians?