Alan Clawley believes history shows that the Council just can’t cope with anyone who displays too much passion for the past. 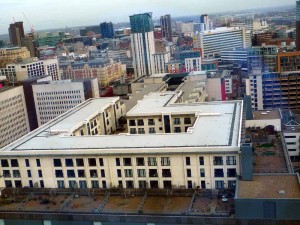 Birmingham from The Cube

Who else but people who are passionate about conservation would one expect to find sitting on the City Council’s Conservation and Heritage Panel, a body expressly set up to speak up for Birmingham’s architectural heritage.

But a report in The Birmingham Post this week suggests that the Chair of the Panel, Councillor Barry Henley (Lab, Brandwood) – who is responsible for deciding who should sit on the Panel – thinks otherwise and wants to remove members who have the temerity to object to developments that harm the City’s heritage. He wants to replace them with ‘architects’, presumably in the belief that ‘architects’ prefer the new to the old and will be more sympathetic to property developers than architectural historians like Andy Foster, conservationists like Eva Ling of the Twentieth Century Society and archaeology experts like George Demidowidcz.

There are of course architects who specialise in the conservation of old buildings. There are also a few property developers, such as Urban Splash, who specialise in refurbishing them. So it should be possible in theory to have representatives of both these groups on the Panel. The most important qualification should be their proven passion for conservation whatever their background.

But history shows that the Council just can’t cope with anyone who displays too much passion for the past.

Joe Holyoak is an architect, urban planner and supporter of Friends of the Central Library who represented the Victorian Society on the Panel for 20 years until June 2007 when he was dismissed by the Chair at the time, Councillor Peter Douglas Osborne (Con. Weoley). The headline in the Post article written by Paul Dale (13 June 2007) read, ‘Why outspoken Joe failed to conserve place on panel’. Dale noted that there was little attempt among council insiders to deny that Mr Holyoak’s removal from the panel was anything other than a straight-forward political decision, and concluded, ‘There is no place any longer, evidently, for Joe Holyoak however well qualified he may be’.

There can be only one conclusion to draw from this sad tale – leading councillors of all the main parties cannot tolerate dissent. They don’t know how to handle it, especially when the dissenters can’t compromise their views. Heritage can either be protected and enhanced or dismissed and destroyed. There is no half-way house. To give themselves an easy ride they are looking for panellists who are prepared to sacrifice heritage for the unproven benefits promised by commercial property developers.

That has long been the Birmingham way, a way that has resulted in the destruction of many fantastic buildings that were missed only when they had gone. Is it always to be left to the few dissenters to fight their battles against so-called progress? It is surely no co-incidence that news of the dismissal of two members of the Panel who have publicly argued to keep the Central Library emerges just a week before the Planning Committee meets to approve Argent’s plans for the building’s destruction.