After a promising week at Villa Park, Dave Woodhall sees some parallels. 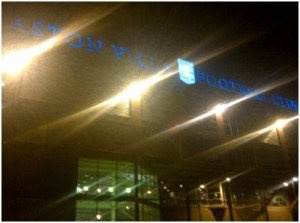 On December 27th 1983 I was in the New Crown & Cushion, Perry Barr, with a couple of like-minded individuals talking about that afternoon’s upcoming games. Villa were at home to Spurs while the singularly most unappealing fixture of the day saw Wolves, struggling at the bottom of the table, entertaining Everton, who were also doing badly. We’d played at Everton a couple of weeks earlier, a 1-1 draw in front of a crowd of 15,160, many of whom had amused themselves by chanting “Kendall Out” before their new signing Andy Gray equalised. Everton, by common consent, were in trouble, as was proved by their 3-0 defeat to a Wolves team who were en route to division four.

In the next 3 ½ years they won the league twice, the European Cup-Winners Cup, the FA Cup and would very likely have won the European Cup at least once had English clubs not been banned from Europe after 1985.

I got thinking about that Everton team over the past few days. It was made up of a few youngsters who had come up through the ranks, signings from such unlikely sources as Dumbarton, Tranmere and Bury and when things were going badly at the start of the season Kendall brought in Andy Gray, no longer the supreme goalscorer of his Villa days but still a wise old head for the inexperienced kids to learn from. Does any of this sound familiar?

I know it’s all ancient history. The game has changed and I don’t for one second think that the sort of team Paul Lambert is building will go on to defeat all-comers as did that Everton side of almost thirty years ago. But I’ve not seen much this season to make me think that, given time and a bit of luck, a top four spot is out of the question, and with the way football now works that’s as impressive for a club of Villa’s resources as actually winning the league would have been in 1985.

If the future does go to plan maybe this was the week we’ll look back and call the time when it all started to go right. Everton’s success could be traced to a League Cup quarter-final when they scraped a draw away to Oxford United, won the replay then (extremely luckily) beat Villa in the semi. Our League Cup win last Tuesday at a similar stage owed nothing to luck. Villa outplayed Norwich for all but the early stages of both halves and if the 4-1 scoreline was a bit flattering it showed that Christian Benteke and Andreas Weimann are a red-hot strike partnership in the making.

If that was a good result, Saturday afternoon was sensational. Liverpool might not be the team they once were but Anfield can still be an intimidating place for any team who aren’t totally committed. Such a young side as Villa put out might have been blown away, particularly after a torrid opening 25 minutes, although once Benteke’s first goal went in they gave a performance as accomplished as anyone could have dared hope. Weimann’s goal was quite rightly acclaimed but that was just the best moment in an afternoon of which to be proud. The age of the team – apparently the youngest in the Premier League all season – has been commented upon and it’s also worth remembering that just three of the starting line-up cost a transfer fee. And this against a side put together at a cost of over £100 million.

Villa are still dangerously close to the bottom three, with a couple of difficult games coming up. The world could again look a much unhappier place in a fortnight’s time. However, after three seasons of mistakes, aimless drifting and downright bad luck, a bit of dreaming can surely be allowed.