Richard Lutz finds solace from the inchoate wreckage of the last week.

I have just re-surfaced from a surfeit of Fulmer’s Mouthing Snaffles, twisted Snaffles, the four ring Wilson driving bit and, as headlined, the renowned anti-wind sucking snaffle.

They all share pride of place amidst 6,000 years of history in the local museum in the remote Scottish town of Stranraer on the ultimo southwestern tip of this area, which snuggles into what resembles a hammerhead of land jutting out into the Irish Sea. 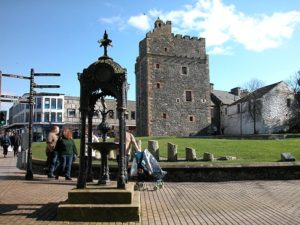 The town took a vicious left hook to its economy when not one but two ferry companies up and fled to the more modern Cairnryan sea terminal up the coast.  Stranraer, it seems, is left with its memories and, you might know, a struggling football team.

But the museum joyfully reflects its jumbled past. There among the arcania of equestrian equipment (such as the full spectrum of snaffles) are the Napoleonic sword for a certain Lord Jolly of the Loyal Galloway Volunteers; a comprehensive pictorial display of the portable Mulberry floating harbours that were built nearby in the run up to D Day; and, a terrific 5000 year old axe with a bronze embossed handle that would bless the leather belt of any Neolithic man about town.

Despite losing the Irish Sea traffic, this quiet town, now officially on the road to nowhere, can still boast a couple of things besides its museum. One is the array of multi coloured streets (as above) with tightly packed houses resembling a pack of fruit gums. And the other, the local Galloway accent.

This combines a soft Scots dialect with a melodic brogue from Ireland, which is only a paddle away to the southwest. A conversation with a Stranraerovite can seduce you. It is a blend of gorgeous sounds that will bless the dullest of eardrums. Even the simplest of phrases ripples in a long ululating roll of County Mayo, Galway and Kerry, not to mention the nearby Antrim coast.

It’s a delightful dialect and was a joy to hear, for instance, when the waitress in The  Coffee Bean produced a haggis and cheese roll (with chips, of course) and introduced it with a chorus of wavey sounds that created new vowels which defied translation.

I walked around Stranraer for hours. There was a lot of bustle around the taxi rank where cars boasted they could get you to places as far afield as Newton Stewart, Gatehouse of Fleet and, on a good day, all the way to Kirkcudbright. I find the shop where a certain Mr AC Nicols stored his invaluable collection of 100 year old glass negatives detailing Edwardian local life. And I peeked into the conversations of these so called Galloway Irish as they rambled on about the stuff of life: late buses, the all changing weather and what’s next for the leisure centre.

I leave you with the explanation of what an anti-wind etc etc is used for as it sits in its mahogany case amid the Clydesdale horseshoes, the displays of butter making, the bloodsticks, the fleams  and the hand turned curd grinder.

It’s put into the mouth of an over eager young horse to stifle over-breathing while working so it doesn’t wear itself out too quickly. There you go.

Now, that’s something you can’t find on Amazon, Gumtree or Craig’s List. But it’s highly available in Room 2 of the Stranraer Museum.