Alan Clawley, who has died from cancer aged 74, was the kind of tireless campaigner that every community needs more of. The causes that he became best known for – saving Birmingham’s modernist central library from demolition and championing the work of its architect John Madin – may not have been the most popular, but Alan fought for both tenaciously, assiduously and with a relentless determination that was both an example, and an inspiration, to others.

That he was supported in his efforts by such informed and respected voices as those of English Heritage (now Historic England) and the Victorian and 20th Century societies, and by knowledgeable local architectural experts Joe Holyoak and Andy Foster, speaks volumes for the strength of his arguments.

Fearlessly taking on both Councillors and senior council officials over the library, exposing their cant, their ill-informed interventions, the deep flaws in their arguments, Alan presented a coherent, convincing case for the defence. He scoured official documents, challenging a decision-making process that had clearly reached its conclusions before it had examined the evidence, shining a very bright light on its shortcomings in a way that no elected councillor came close to. And he did so incessantly, initially via the online pages of Adrian Goldberg’s Stirrer website and, following its closure, via its successor, the Birmingham Press. 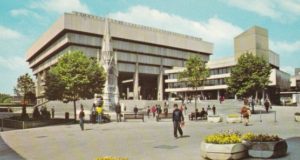 What his Council opponents wanted at Paradise Circus were 60-storey towers, what they are now getting is a bland, urban office scape as forgettable as Madin’s imposing inverted ziggurat was memorable. Alan saw this coming; he read the planning applications, poured over the Paradise Circus development plans and strategy documents, and when it came to the new Library of Birmingham, Alan repeatedly warned of the project’s true cost and un-affordability, of how the city would end up with a central library reduced in size and offering a diminished service to that of its predecessor.

Whilst many councillors and high-ranking city officials derided John Madin’s work, readily approving or supporting the demolition of many of his key buildings, and colluding in trashing his reputation, Alan spoke out for surely the most important and influential of twentieth century Birmingham architects. This admiration resulted in a biography of Madin, published in 2011 (part of the RIBA’s 20th Century Architects series) and the first serious overview of Madin’s work.

Alan wrote and researched two further books, Batsford’s Birmingham Then and Now (2013) and Library Story: A History of Birmingham Central Library (2016) and helped form the Brutiful Birmingham Action Group, its goal to increase appreciation of this much derided brutalist style of modernist architecture.

Yet there was more to Alan Clawley than the Birmingham Central Central Library and John Madin. Moving to the city in the early 1970s after training at the Architectural Association School of Architecture in London, where he had graduated in 1969, he became involved in the Small Heath Park Housing Co-operative and was an active member of the Green Party, standing (as did his wife Hazel) in many elections (both he and Hazel were on the ballot paper for Thursday’s council elections), and he was a friend of Moseley Road Baths amongst many other community campaign groups.

Indeed, so much of what Alan Clawley did was undertaken without the thought or expectation of financial gain, but because it was worthwhile and needed to be done. Surely a significant measure of a life well-lived.