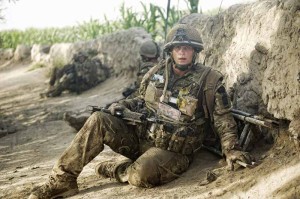 Richard Lutz ponders the cash Britain spends on defence and asks whether it’s really worth it.

Last weekend I blundered into a military re-enactment day in a big park. Guys dressed as the SAS, Highland infantry, American Civil War rebels and, oddly, as Nazi stormtroopers.

The display could not have come at a more prescient time – only 24 hours after these mock soldiers paraded and blasted their fake guns Into the air, the UK government announced a £500 million spend in upgrading its naval yard in Scotland which includes four nuclear Trident submarines.

Chancellor George Osborne praised the investment underlining how the funding will protect the 6,700 jobs at the Gare Loch base near Glasgow and create thousands more.

It is news that needs to be seriously thought through as Britain ponders whether it needs to be a nuclear force …or even if the country needs to a force of any major kind.

Yes, the jobs will be bubblewrapped. But is that the reason to spend billions on armed forces under the anachronistic misused description of ‘defence’?

The taxpayer will spend £45.33 billion this year on this thing called defence. That is the approximate budget for all of the UK’s schools and education.

It represents 2.1% of the nation’s GDP. By contrast, Ireland spends 0.5% of its GDP on the military, according to World Bank statistics, Indonesia 0.8% and Japan only 1%.

Think what Britain could do if it abolished all of its armed forces. In a trice, the education budget could be doubled. Or the health service, with its burden of unlimited supply of free care, would be bouyed up, or our hard -pressed transport system given a good infrastructure makeover.

These are, of course, simplicities.

But the UK simply does not need to grab more than 2% of its wealth for defence. Military big budget projects surely went the way of the wind when the Cold War became a busted flush. There is no need to have four nuclear subs patrolling not only Britain’s waters but the globe. There is no need for attack jets in the sky or big armoured units ready to rumble across the East European plains. It is history. It is….old-fashioned.

So, you have to now ask what the £45 billion will actually protect us from? ISIS landings in Kent? Pirate ships manned by Somali thieves? Iranian shock troops pouring out of Calais? East Ukranian warlords bombing us from Donetsk?

Military apologists warn of protecting us from unknown enemies. This is the politics of paranoia. Yes, and, also, generals will moan about budgets. But they would. It’s part of their career to want more and say a dangerous world needs to be kept at bay with the help of the United States. We have, they will quickly admit, to follow an American template.

But the question remains: why is it that Canada’s defence budget is about a third of our £45 billion annual military budge?  But its relationship with its big spending neighbour, the U.S., is still friendly.

Newspaper columnist Simon Jenkins put it best when he wrote during the Afghan conflict: “What do we get from the Army, the Navy and the Air Force besides soldiers dying…and a tingle when the band walks by?”

A polemic question. But one that has added resonance as the UK swears by a NATO credo that calls for military spending to be pegged at 2% per year of national income until 2020, which indicates no real decrease of how money is allocated to the armed forces.