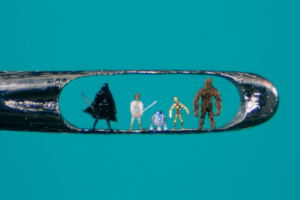 For a limited time only, the smallest sculptures in the world by internationally renowned micro sculptor, Willard Wigan MBE, are being housed within the landside All Bar One Bar and Restaurant at Birmingham Airport.

Following Willard’s hugely successful American and Australian tour, and whose work has recently been featured in promotion of the new Hollywood blockbuster, Antman, it is fitting that such wondrous works, which are sculptured within the eye of a needle, or on the head of a pin, will be on display in Willard’s hometown of Birmingham, for the travelling world to adorn.

Described widely as the 8th wonder of the world Willard’s work includes an interpretation of da Vinci’s, The Last Supper, Cinderella, her ugly sisters and stepmother in the eye of the needle and Prince Albert on the head of a pin.

After being honoured by HRH The Prince of Wales with an MBE for his services to art, Willard has amassed a significant following for his work. Collectors include legendary illusionists, Siegfried & Roy, the Nelson Mandela Fund, Lord Bath, Sir Elton John, Sir Philip Green and HM Queen Elizabeth II.

16 pieces of Willard’s work will be on display at Birmingham Airport for a limited time, each micro sculpture being housed in its own microscope viewing unit for the public to see.

Willard comments; “As a child I was always told that as a dyslexic black boy growing up in the Midlands, I would amount to nothing. I wanted to show the world that ‘nothing’ does not exist. I created artwork of such minute proportions that they are not visible to the naked eye. The smallest things often have the largest impact. I believe my artwork expresses the same. It is a privilege to exhibit my work in my home town, at Birmingham Airport.”

This is a wonderful opportunity for passengers and the general public to view the work of this artist, described by many as a genius.

Richard Gill, Birmingham Airport’s head of commercial, added: “This is such an interesting and different exhibition which I am sure will appeal to passengers both young and old. The pieces are unique and quite incredible and what’s even more fantastic is that the sculpture is a home grown talent, so we are proud to support the art being exhibited at Birmingham Airport.”

Front pic: Willard’s The Last Supper in the eye of a needle.