Birmingham Rotary Club hosted a breakfast at the ICC in Birmingham as one of the cities marking International Women’s Day on Friday 8th March. Their special guest speaker was Debra Davis of City TV Birmingham and Melissa Mailer-Yates reports back on her speech. 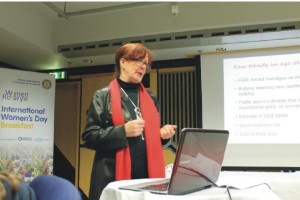 Debra began her introduction with a series of questions relating to just how much has been achieved by women in today’s world of glass ceilings. Then turning the focus to her personal life we learned how as a youngster she had been inspired by the strength of resolve characterised by Scarlett O’Hara, having suffered more than her fair share of personal tragedy in her own young life.

Debra also drew on the names of Canadian charismatics such as the Hon Judy Erola and Hon Monique Begin – both of whom were instrumental in ensuring that the equality clauses were enshrined in the Charter of Rights as part of the Canadian constitution being repatriated from Westminster.

Our eyes were truly opened to the considerable amount of success in this field in Canada, with her version of the Famous Five, a group of Canadian women who challenged the Supreme Court of Canada in 1929 by appealing to the Law Lords in the House of Lords in Westminster. They asked, did “persons” as defined in the British North America Act (1867) include women? Could women be appointed to the Upper Chamber in the House of Commons in Canada? As a result, the landmark decision truly changed the definition of “persons” to include women throughout the Dominions. This then paved the way for so many countries subsequently to work under the same jurisprudence and gain similar rights for many more women.

Debra herself has always played a part in Canadian politics working under Trudeau and more substantially with Jean Chrétien, before becoming a tour de force in London at Canada House. She has been involved in establishing training courses for women aides in politics, and has spoken at, and worked with the Arab International Women’s forum of which she was a board member for 10 years. Her drive and ambition playing a major part in bringing strength and structure to a new understanding of the substantial part women can play at all levels in the political world.

On occasion Miss Davis continues to play an active role in Canadian politics, although she no longer has to juggle childcare with her activities. We listened to a wonderful description of her giving a full lecture to a group of businessmen some years back where, undeterred by her role as a mother, she managed to care for her youngest child whilst still formally speaking. Her attitude to including her children within the workplace was accepted and instituted through her own adamant attitude that it was not only feasible, but sometimes essential, and she hoped her own daughters would one day follow suit too, not seeing the role of a mother as a barrier to full integration within any working field.

The rapturous applause which followed her speaking was true testimony to her having fulfilled the role of inspirational speaker which had been entrusted to her, a true representative of the values and consequential changes which have been the result of International Women’s Day since its institution some 15 years ago. The City of Birmingham can be very proud of its own new television station, City TV, boasting the likes of Debra Davis at its core, and everyone at the Birmingham Rotary event was assured of a television channel invigorated by a woman driven through strong values, and dedication to equality which will undoubtedly be apparent within the structure of the new Channel.