A third-year fashion student from Coventry University has fended off the UK’s top styling talent to claim the Clothes Show Live ‘Young Designer of the Year’ award 2012. 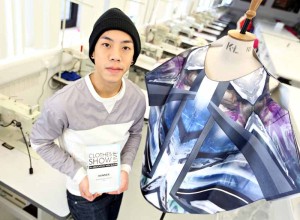 Curtis Li, 22 and originally from Hong Kong, wowed the judges at the show with his futuristic garment design to claim the £1,000 prize, a week’s work experience with a leading British fashion designer, and the chance to see his outfit on the catwalk.

This year’s Clothes Show Live at the NEC in Birmingham was the sixth consecutive year fashion undergraduates from Coventry have reached the final of the prestigious competition, and comes just a month after student Alice Moore scooped top prize at the Midlands Fashion Designer Awards.

Entrants were asked to design and make a dress with a ‘Fashion Wonderland’ theme which takes a cue from their favourite fashion icon, and Curtis came up trumps with a funky top inspired by punk rockstar Siouxsie Sioux.

The outfit is a futuristic take on the gothic age, styled using the shapes, colours and patterns associated with architecture from that period. Curtis took advantage of the University’s state-of-the-art digital printing technologies to transfer his design onto the fabric.

Two other students from the course made the final, but just missed out: third-year Emma Connor, from Rugby, who drew inspiration for her dress from style icon Daphne Guinness; and first-year student Gary Ezeugo Ezechukwu, from Lagos, Nigeria, who based his design on British fashion star Ozwald Boateng OBE.

All three entries were supported by Coventry’s Fellowship of Drapers – a livery establishment with 450 years of history in the city – which ensured the students could access the latest industry fabrics for their work.

Curtis Li said:  “I’m delighted about winning the first fashion design award in my life. It’s an amazing achievement for me and gives me so much more confidence. I’m happy to say that I’m making my family proud as they have been supporting me all the way ever since I decided to step into this fashion pathway.

“I’d also like to thank my lecturers Angela Armstrong and Ann Muirhead, and our fashion technicians Scarlet and Eva. Without their help this wouldn’t have happened, so the award is not only mine – it’s also a testament to the University’s efforts. I’m very pleased with this result and I’m ready for the next challenge.”

Angela Armstrong, senior lecturer in fashion design at Coventry University, said:  “Curtis thoroughly deserves this prize. We’re absolutely thrilled for him, but also for our two other students who made the final and just missed out – that in itself is a fantastic achievement.”

The annual Clothes Show Live is the UK’s biggest and most influential fashion and beauty event. Each year the show features the Creative Awards Programme, which culminates in the ‘Young Designer of the Year’ accolade. For more information on the awards, visit www.clothesshowlive.com.