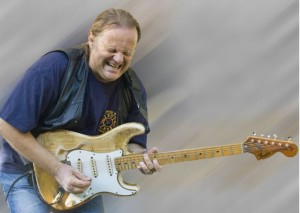 New Jersey son Walter Trout tours the UK so often that he’s become something of an Anglophile in his verbal references. He’s also quite a parrot (or magpie), frequently imagining what old bluesmen (mostly those that he’s worked with) would say under given circumstances.

During the 90 minute set, he invoked the characters of Junior Wells, John Mayall and Jimmy Reed. The mix was initially sludgy and strangely quiet, but as time passed, and your scribe moved to a better place, the sonic spread widened and clarified its thrust. It’s always advisable to hear rampant blues-rock in its full glory.

Trout’s humour (whilst we’re still discussing humour in rock) is still present, but it’s a more direct form of macho rib-nudging. It doesn’t interfere with the often downbeat sentiments of the songs. Trout’s blues really do sound like blues, dealing with more than the usual share of chick, rehab and politician burdens. Lately, the band has included master organist Sammy Avila, who really broadens the palette into a soulful R&B area. All the more powerful when Trout answers back with an acid guitar splash. Rick Knapp is one of the most expressive blues bassists on the scene, endlessly delivering fills and flourishes, small note-intricacies that would be more at home in a jazz combo. He’s descending from Jack Bruce.

Trout kept the energy levels on a consistently high level. There wasn’t much light and shade during the set, but some songs were slower and more ballad-like. “Recovery” and the title track from Blues For The Modern Daze (Provogue, 2012) were highlights from the latest album. One significant gear-change came when the band was augmented by a guest singer, who appeared to be a member of their road crew. His visual and vocal approach came across like a cross between Ian Gillan and Robert Plant, adding a dash of screaming soul to the rocking out, hitting all the high notes and shifting the accent in the same way that Avila did with his organ spillage.

To book for Walter Trout at The Assembly click here