Dave Woodhall meets a comedian, and much more. 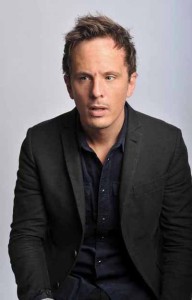 Dan Clark is an actor, writer and star of hit TV shows such as the Mighty Boosh and How Not to Live Your Life. He’s recently returned to the wonderful world of stand-up and will be bringing his show These Songs May Contain Jokes to the Glee Club on 4th November. He told us about his previous trip to Birmingham.

“I played the Town Hall last year in what was just a stand-up show with just a couple of songs on my guitar. It was a great show, one of the best reactions and biggest audiences of the tour. It’s quite a big stage there, not very intimate and if you’re not very animated it can be quite hard, but it’s such an incredible building. There’s a real vibe and a fantastic history about it. But the new show wouldn’t be right in that type of venue, we wanted to play clubs and have the band in, to feel a bit more spit and sawdust rather than somewhere like the Town Hall which is quite, well,  posh.”

You branched out into TV work for a while , but now you’re back doing stand-up. Is this how you see your career panning out?

“I can say I do it, but it’s not the only thing I’ve ever done. I did stand up for solidly three or four years and got to the point where I was good at it, but then I got my own TV show and because I write, star and co-produce that, it took over my entire life for four years and the stand-up had to stop for a while. I’ve always been the kind of person who gets a bit bored, and moves from one thing to the other and back again. I like doing lots of different things. When I went on tour some people didn’t even know I’d done stand up before and I had to remind them.”

The show’s called These Songs May Contain Jokes. Does that infer that there’s a stronger musical element than most comedy events?

“I’d always been in makeshift bands growing up and been a real music fan. Part of me has wished I was in a band. I played guitar, and slowly music crept into my comedy with the occasional song, then when I came back to stand-up I was doing more songs and I felt I wanted to do it properly – not just one man and his guitar, more a proper show with a band. So I called around a few musicians I know and persuaded them to form a band. We tried the show out for a week in London last May and people who came said afterwards that they didn’t think the music would be so good.”

Does this mean you will be moving towards a more music-based style of comedy in the future?

“I don’t have a long term plan but I’ve recorded an album for next year and I think it has a lot of potential for the songs to work in a comedy context, but also as pure music. For years musical comedy was a dirty phrase, it was naff and thought of as a bit rubbish, no-one had done anything decent for  long time and then Jack Black’s band Tenacious D introduced me to Flight of the Conchords and the Humourbeasts and I realised that sort of comedy didn’t have to be embarrassing, it could actually be funny. It’s probably the thing I enjoy the most, but as I say to the guys in the band if you can make a living playing music you’re the luckiest people alive because it’s the best way to make a living. It’s much more fun than writing or acting. I’d like to do it for longer but knowing what I’m like I might take on Chekov next year, become a serious actor.”

You’re 36, and some of your most memorable work has dealt with conflict with younger people – the chav on the bus scene in How Not to… for example. Is that a sign of growing old?

“I still think I’m young then when I hang out with people in their early twenties I’m reminded I’m a whole generation away from them. The lines of age have been blurred a lot because you can still be in your late thirties and ride a skateboard, that’s not frowned upon, it’s not like our dads’ generation when you’d leave school, wear slacks and get a job. There was a time when it was very clear that if you were a certain age you were of a certain generation, whereas you can stay young quite old and still interested in a young lifestyle now.”

Does that help you keep your cutting edge, or does it mean you aren’t relating to people as well as you think?

“I’m very childish in my sense of humour and my outlook on life, I guess being young at heart helps in comedy but I can’t go out drinking after shows anymore because it hurts too much the following day.”

You’ve achieved a lot already. If you had to leave something to be remembered by for future generations, what would it be?

“I like to think I’ll be remembered for something I haven’t done yet. It’s quite daunting; anyone who does what I do for a living – you can’t set the bar at wanting to do something that will be remembered in thirty years otherwise you will be constantly disappointed. If I had the choice of being remembered for one great sketch or TV though, I’d prefer a TV show, a whole series, something with weight to it.”