Birmingham Repertory Theatre heads downstream to the riverbank this Christmas for a new production of Alan Bennett’s wonderful stage adaptation of The Wind In The Willows from 28 November to 19 January. 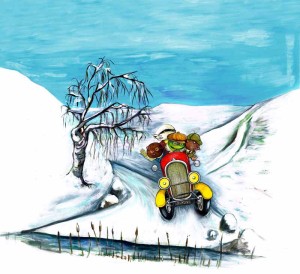 Kenneth Grahame’s charming tale  of Ratty, Mole, Badger and Toad  comes alive as the friends embark on a glorious adventure that leads from Toad Hall, to the perilous Wild Wood and finally to battle. Featuring his own brand of nostalgia and comedy, Alan Bennett brings Kenneth Grahame’s classic riverbank story to life with music and merriment. And, this fabulous new production by Gwenda Hughes, aimed at families of all ages, is set to be a colourful and traditional production true to The Wind In The Willows we all know and love from childhood.

A cast of sixteen actor / musicians will bring a host of wonderful characters to life. Playing Toad is Matthew Douglas. Matthew, a graduate of the University Of Birmingham, recently starred in The REP’s double bill of productions Travesties and The Importance Of Being Earnest.

Joining Matthew as Badger will be Robert Pickavance. Robert has had a varied television career appearing in Emmerdale, Coronation Street and A Touch Of Frost to name but a few and his list of theatre for children is just as extensive, playing The BFG (Lancaster Dukes Theatre); Captain Hook in Peter Pan and Mole in The Wind In The Willows (York Theatre Royal). The REP’s Mole will be played by Nicolas Prasad whose theatre credits include Maydays for the RSC. Ratty will be played by Oliver J Hembrough.

Playing Hedgehog Herbert will be Andrew Whitehead and Squirrel Shirley will be played by Liv Spencer, both of whom are returning to The REP following their recent performances in The Witches Promise. West Midland’s actors Chris Nayak and Duane Hannibal will also be returning to The REP playing Albert and Weasel Norman respectively.

Gwenda Hughes returns to The REP to direct The Wind In The Willows. Gwenda was an actor for several years before receiving an Arts Council Trainee Director’s Bursary to work with Theatre Centre Young People’s Theatre. She has previously worked as Associate Director at The REP where she directed over twenty five productions and in spring 2012 she directed the delightful story-telling Neighbourhood REP production of Spring Hill Stories at Spring Hill Library in Birmingham.

Design will be by Michael Holt, lighting design by Paul Pyant, sound design by Gregory Clarke, movement direction by Jenny Arnold and musical direction and arrangements by Conrad Nelson.

The Wind In The Willows