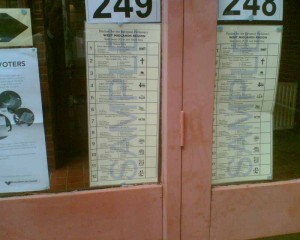 Tomorrow you can do the most important thing you’ll do all year. You can walk down the road and vote. Unfortunately, the majority of the country won’t bother. They’ll be too busy or there’ll be something they want to watch on the telly. There’s nobody worth voting for, they’re all as bad as each other and one vote doesn’t make any difference anyway.

Maybe at a time of unparalleled cynicism towards politicians we ought to step back and realise what the vote means. The Levellers, Chartists and Suffragettes fought for the vote and some died in the process. Millions fought wars so that democracy could be continued.

It’s not that long ago that TV news broadcasts showed queues of black South Africans or former Soviet bloc citizens waiting for hours to cast votes in an election many of them thought would never take place. None of them believed that watching East Enders was more important.

You might not think that voting makes a difference. In that case, you’ve got no real right to complain when your local council behaves wrongly. You might think there’s nobody worth voting for. That’s not the point – it may sound a waste of time to go to the polling station and spoil your ballot paper, but at least you’ll have made the effort. You’ll have realised that voting is a civic duty.

A few years ago an advertising campaign aimed at increasing voting in a general election used the slogan “Use your vote – he’ll use his,” pointing out that extremists of all kinds are more likely to vote than the rest of society. I don’t know how effective it was, but it certainly made me realise that the biggest enemy of democracy isn’t fascism, communism or any other sort of political or religious theory – it’s apathy.

If we don’t vote tomorrow there may be more extremist councillors. If we don’t vote there’ll be more councils thinking they can get away with immoral and inefficient practices because the electorate don’t care. If we don’t vote the government will be given the green light to continue with its assault on public services. This year, voting is more important than usual. Not only do we have local councils to elect, we also have a referendum which gives us the first, and possibly only, opportunity to alter the way we elect politicians.

I’ve heard it said that compulsory voting is undemocratic and that we all have the right not to vote. My reply to that argument is that we hear a lot about our rights but far less about our responsibilities. I don’t think it’s too much to ask every adult in the country to make the effort, once a year, to take five minutes out of their time and place an X in a box.