Dave Woodhall enjoys a night out in good company.

I’ll happily admit that I’m a sucker for a bar band. My idea of heaven would be something like a good pub with decent beer, as part of an appreciative audience watching a bunch of competent musicians doing what they do for the sheer enjoyment of it. Nothing flash, just good, honest music. 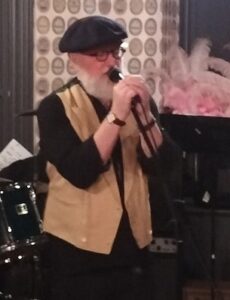 I’ve written before about the best local venue I know for this sort of thing – Tuesday nights, Henry’s Blueshouse at the Bull’s Head on Bishopsgate Street. The pub’s great, the beer is good and those watching are knowledgable enough to know the quality of what they’re listening to.

One of the best local attractions for this sort of night was alays the 58 Blues Band, so I was sad to hear that they were no more, victims of lockdown and changed circumstance. However, singer Chuck Wren wasted no time in putting together another outfit, his Rollin’ River Band, and last Tuesday the regular audience learned what the new boys in town were all about.

In the circumstances Stormy Monday Blues was appropriate, if a day late. The rest of the band’s set was much in the same vein – Howlin’ Wolf, Muddy Waters, Willie Dixon standards given a modern treatment. Nothing groundbreaking, no real surprises, just good old-fashioned music. Bar band heaven, if you like. Chuck’s added a keyboard player to the new band, which givess an extra, jazzier depth to the sound, showing elements of a Santana-like edge to their music.

With a tight rhythm section and a guitar style that was distinctive without being overly flashy, this five-piece outfit warmed an appreciative crowd on a wet and windy winter’s night. That’s Tuesdays sorted – if anyone can tell me of six more nights like this for the rest of the week, I’d be grateful. And if you want to know what else you can see at Henry’s, look here.