One of the joys of live music is finding quality in the most unlikely places. The story of Henry’s Blueshouse is well-known to anyone with a sense of history, or who might be old enough to have seen those original nights at the Crown where Black Sabbath started out and some of the biggest names in rock and blues appeared in the upstairs room of a Birmingham pub.

Henry’s started out again a few years ago at the Bull’s Head in Bishopsgate Street and had started to gain a reputation and a healthy-sized crowd when Covid struck. Never one to let adversity get in the way of a good idea, veteran promoter Jim Simpson re-started the club as soon as he was allowed and while the big names are difficult to attract to such an intimate venue, Tuesday night at the Bull’s Head is once more the place to be for lovers of this authentic form of music – and it’s free. 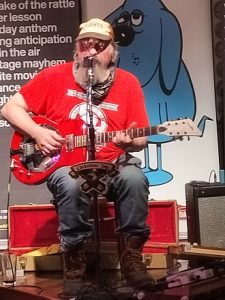 I was there this week to see cigarbox guitarist Chickenbone John, together with local hero Ricky Cool on harmonica, providing a twenty-first century audience with music from the middle of the twentieth, in the process turning a pub off Broad Street into a juke joint in the Deep South.

There was more than just music, as John prefaced each slab of Delta blues with a lesson on the history of both song and writer, whether they be Willie Dixon, Robert Johnson or the most obscure Mississippi farmhand. I don’t doubt that there were a few blues experts in the audience, but they would have all learned something new from this most engaging of musicians. This city has provided the world with many musical innovations, but on Tuesday night we were listening to the stuff it all came from.

There was a decent-sized audience although there’s always room for a few extra. If you want to know more about what’s coming up at Henry’s look here.

And if that’s not enough, John will be hosting the cigarbox festival Boxstock 2021 on 15th-16th October.