Richard Lutz witneses a digital war over the information we crave. 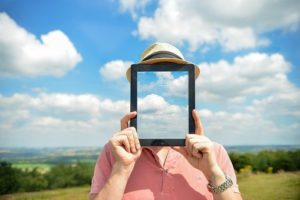 And there’s the news.

Or not, if you’re in Australia and use Facebook. The site banned all news access there because the government wants to charge the social media giant for grabbing stories without paying for them.

But first let’s get something straight on this digi-bunfight: You don’t really need Facebook to access info on the pandemic, the economy, sports or celebrity gossip.

Just go to the webpages of your favourite newspaper whether it’s the Sun, the Guardian, tne New York Times, yhe Redditch Advertiser or the Rocky Mountain News. Yes, the papers are ailing and some are flat out broke. But that’s where news is for you. Not some corporate mega-giant which hoovers up well researched stories so the site can trouser bags of cash for stealng copy.

Facebook news coverage is second hand, second rate, carved by algorithms to suit a reader’s internet profile. In other words, you get more of the same, so you don’t expand your concept or opinions of our trembling globe. That’s the way they increase hit rates and make loot.

Facebook and its cronies are pillaging the free press and killiing it, and that’s ironic since they need the press (and other good media outlets) for the material they shove out. It’s a media snake eating its own tail. But as one expert told the BBC the other night: “Facebook is flexing its muscles in a showdown with democracy, which for the last two decades has been taking a nap.”

The giant must be put back in its place. It is a publisher, not an open access site. It needs to be whipped into shape by law and regulation.

So, turn you back on Facebook. It, and similar platforms, depend on users being lazy or hypnotised by the ease of digital access. Turn the clock back: read your national paper, your local paper, your weekly magazine, listen to radio, watch tv news which all research and create current affairs of value. Enrich your mind, expand your knowledge and, vitally, keep the original sources alive. Because as that expert warned: “Facebook has total and absolute control over critical information systems.“

Now to other events. And a humbling apology for that shabby headline above. You see, I had to clean out my shed. The place has been a dumping ground for three decades. But the time has finally come….into the maw of the grubby underworld of junk, I must go.

Amid the dross of garden netting, rolled-up wire, rusty tools found in buckets filled with rainwater, I hope to find the following that have gone walkies:

**A bike lock that was perfect. 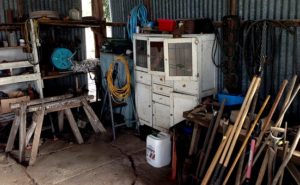 I don’t find those. But I do find, way way back in a dank corner, a box of half-used bottles and containers with white spirits, turps, oak stain and, yes, my all time favourite – Jeyes Fluid. I actually never really figured out what Jeyes is all about. I think it’s an all purpose ooze of gunk that makes you feel better, cleaner, fresher. And not much else. I know it smells cleansing. And its dark viscousity (almost black mud) really looks like it’s the business for doing, well, most jobs including cleaning your dentures (Warning: Don’t do that).

All I know is it smells overwhelmingly sanitising. And every time I have to do work in the garden, I panic and run out and buy another gallon of the stuff. I’ve got flagons of the gunk, buckets, hogsheads, jeroboams of the agent. And that makes me feel good.

As a matter of fact, I’ll use a lava flow of the stuff to clean out the bloody shed, the Augean Stables of my life that somewhere keeps secret what happened to my green ring, my great little wrench and a hatful of half-completed pathetic handy projects that came to zip. The shed will be emptied, useless, forgotten. And smelling of Jeyes for eternity.