Andy Munro and a case of gambling fever.

My visits to the bookies are usually confined to Grand Nationals, World Cups and FA Cup finals but with Manchester City on the box in the Champions League I thought that I’d have a flutter, buoyed by recently investing a fiver and winning a tenner on Arsenal winning the FA Cup. 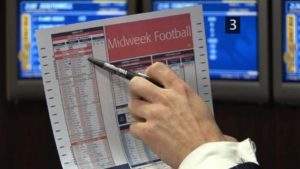 visit there were as many people behind the counter as there were on the other side. Surprisingly, I hadn’t been banned following my cup final betting coup.

Being the last of the big spenders, I decided to invest another fiver on various combos not including what I thought was the almost impossible scenario of the Mancs losing. My two most lucrative bets were a quid on Lyon winning at half time and losing at full time at 66-1, and a 2-2 draw at 20-1. Once City equalised in the second period, I thought that I was going to be quids in as they pressed inexorably for the winner. Then as the ball came across to an on-form Sterling with the keeper nowhere, I was off the sofa about to lap the lounge and it all then went pear shaped.

To rub salt in the wounds, this was followed by a poor VAR decision and my dreams went up in smoke. If Pep thinks he’s gutted, he doesn’t know the half of it!

I’m now quits overall and was thinking of betting on the red Mancs but if I do, and if I added a couple of noughts on to all my investments, would that put me in Paul Merson/Stevie Clarridge territory? So maybe the fun stops…