Richard Lutz travelled to Mirpur to find the home of the balti. 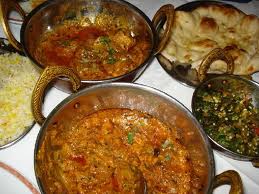 The saliva starts building at 4pm. It’s in the back of the throat. There is a pulsing from the vagus nerve in the neck that connects the brain to the body. It’ll be Friday night in a couple of hours. Work is almost over, school is out.  And you want…no, you need, you crave….a balti.

It’s a Birmingham thing: head for the nearest curry house. Or get it delivered. “I could murder a balti,” is the catchphrase and the shout off the streets, in the traffic jams, on the buses.

The food is from the KashmirI region of Pakistan, where folks used metal bowls to cook their curries and grabbed a naan bread the size of Villa Park to scoop the vessel clean. Immigrant families brought it to Birmingham in the mid-seventies and the emerging cafes gave quick cheap meals to the masses. There was even a balti triangle marketed by city tourism chiefs and at least a dozen balti houses proudly guaranteed it was The Original.

Twice in the past, I’ve traveled to the city of Mirpur, accepted as the Kasmiri/Pakistani city where the curry dish came from. One of the abiding questions was: where do I grab a balti?

My wife Jane and I took a bus from Islamabad to the city, driving through stark countryside pocked with small villages. Most of the trip was on the monumentally busy GNR- the Grand Trunk Road that connects Peshawar to Lahore. We left the roaring traffic at Jhelum and followed the river north.

The route to Mirpur was reminiscent of the southwest of the US. It was empty, quiet, huge, engulfing big escarpments, dry riverbeds, a patchwork of little towns. Mirpur, spread over a valley, was a low lying city, busy, whirling with dust and rambunctious traffic, buzzing with three wheeled tuktuk taxis and gaudy lorries looking like gypsy trucks of the desert.  About 125,000 people lived in this noisy city- that’s the size of Gloucester.

To the west, past a massive brickworks, was the Mangla Dam, built in the sixties and inextricably linked to the future of Birmingham. It flooded hundreds of villages on completion and its inhabitants were given work visas to Britain. They headed for jobs in the West Midlands. And they came with their recipes. And their special curries. Especially to Birmingham. But also to other industrial job-heavy areas such as Manchester and West Yorkshire. Car plants, engineering works, foundries, clothing firms, they all needed workers. And the workers needed food, places to meet. Curry houses flowered. There was so much interaction, in fact, between Mirpur and Britain that the city sometimes is referred to as Little England.

Initially, we stayed at the Jabheer Hotel in Mirpur centre. The food was spicy hot, geared to a Pakistani palate. There was no gearing down for English tastebuds. Meat was on the bone, usually chicken, not plump but scrawny and fresh off the land. Bottled water and the local soft drink, Campsi Cola, rescued the body from being engulfed in flames.

Later, we were invited to the Haq household. They had owned a restaurant in Birmingham for many years. Like many, a chunk of their British savings went back to help back expand their  Mirpuri homes. We quickly became the English couple living up the street. Walking through this residential section, functionally called F6, the Mirpuri links to Birmingham were apparent, alive and resonant:

“Where you from?” someone would ask.

“The Prince of Wales side or the deli side?”

And on it would go. “If you’re in Stirchley, go see Yusef in his caff. Best food in town. Tell him Nyeem says hi.”

Food in the Mirpuri evening was available off the street. Thin curry sauce with goat, chicken or vegetables, was prepared over a charcoal stove. It was hot hot hot, too spicy for me and, usually, the cook just smiled, shrugged and gave us a Campsi Cola.  Back in The Jabheer,  the locals explained that balti is a British concoction.

“It’s kinda like chicken tikka masala. It’s English,” said a guy with a broad Wolverhampton accent. “You don’t actually go in and get a balti here. It doesn’t happen.”

A few years later, I returned to Mirpur to film. In such a short time, there had been a rush of development. The Jabheer now served a larger variety of food. Pepsi had been even added to the shelves alongside Campsi Cola. We stayed in a house and, intriguingly each day, next door there was the strident sound of men training.

We knocked on the gate and were politely invited in. Guys were being led in military exercises in the dusty courtyard. I asked what was the reason and,of course, if we could film or take pictures,  No, no filming.

As for the reason for preparation – a small smile and nothing more as the gate was politely  closed. Look to the hazy horizon and it’s easy to know what was happening. Kashmir, of course, is split between India and Pakistan and the testy border is not far off. Plus, many groups campaign for total independence from both nuclear nations. Simply, politics is complicated. Militia groups abound. No wonder the gate was firmly shut.

We drove north through the sharp empty hills of Kashmir to its biggest city, Muzafferabad. Here, the army dominated. There were continual checkpoints and an officer appointed a civilian to stay with us. I asked our new companion for the reason for the big military presence. He ordered our van down a dirt road to a refugee camp. And he explained these were Muslim scapees from Indian-administered Kashmir just over the mountains. Can we go to the border? Yes and No came the answer. The following day, we signed papers and our guide took us up a sinuous dirt road high above the Neelum River. The only sounds were the rushing rapids in a deep colour green, the grinding of jeep gears and the wind. Below us footbridges crossed the ravine. Raptors circled. Then we stopped.

“There, over there,” our guide said. He was pointing to where the hills turned to mountains and where more silence filled the air. “I can’t bring you closer.”

We returned to Muzzafabad that night and headed for a cafe. Men hunched over tea and plates of curry. Cigarette smoke swirled overhead. We were exhausted. My colleague Mike said: “I need a drink.” Yes, I agreed, I could use one too.

“That’s the difference between you and me,” he said. “You want a drink. But I need one.”

We asked our guide, the guide who never left our side. Pakistan is a country with strict non-alcohol laws. He told us to go back to our rooms after we finished our chicken curry. An hour later, he returned with a plastic bag holding a bottle of Whyte and Mackay’s whisky. I went for my wallet. He held up a hand. The meaning was obvious. This deal never took place.

Over time, we heard that the town was a hive of official and unofficial armed operations. The next night, after a request, our guide took us to a paramilitary headquarters. They were involved in illicit crossings over the Kashmir border to carry out who knows  what. Interviews were allowed (clearly our guide was more than a guide) and the material automatically sanctioned. Obviously, this militia unit was approved by the official army and, come to think of it, maybe it was the army. Or maybe the guide had another side to him. We’ll never know.

Meanwhile, in The Great Balti Hunt, it became a bit more vague. In Muzafferabad, we ate platters of food with cutlery. And then sometimes, a naan was used for The Birmingham Scoop. To the north, to make it even more confusing, was a mountainous territory actually called Baltistan. Most agree it has nothing to do with the food.

To get to Baltistan with our van, to a Baltistan which has no agreed links with our Birmingham curries, meant going back to Islamabad and then driving 24 hours to Gilgit. A trip too far.

We returned to Birmingham. Jet lag over, bags unpacked, a quick debrief from my sons on how the Blues were doing, and that pulsing in the neck erupted. God, I thought, I’m starved. It’s Friday.  I need food. I could really murder a balti.

Thanks to balti expert Andy Munro for extra advice

5 thoughts on “From Brum to Balti-land”