He had been admitted to Russells Hall Hospital in Dudley, took a turn for the worse, and passed away peacefully in his sleep.

David, who lived in Cradley Heath, was a legend in both regional journalism and his local community, the sort of rumbustious, no-nonsense character who you rarely see today. He was a blunt Northerner who hailed originally from Hartlepool.

More than thirty years with the Birmingham Mail, his voluminous local government knowledge and remarkable list of contacts saw him hold to account councillors of all parties, exposing a catalogue of scandals, financial mismanagement, corruption and barmy town hall schemes. Yet he remained widely respected by those same councillors for his fairness and accuracy. 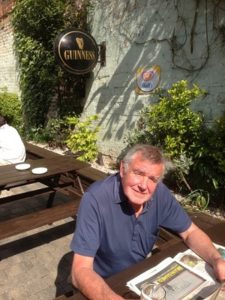 At one time a heavy smoker, and always a Guinness devotee, he operated from two offices. During the first part of the morning, he worked in the Mail’s then base in Weaman Street in the city centre, but from 10.31am most days, the timing being a throwback to old licensing hours, he moved to his “other office”, the Old Joint Stock opposite the Cathedral, where a constant stream of councillors and contacts alike arrived to talk with him, offer tip-offs and generally chew the fat, sometimes queuing for their turn.

He joined the Mail in 1976, stepping down in 2007, but he had occupied virtually every role in newspapers during his long career, including one spell as women’s editor. David continued to hold court in the OJS on Fridays until latterly, when put off by the traffic and the journey time, his friends made pilgrimages into the Black Country to see him.

David was a man of direct opinions and gruff asides but whose heart was in the right place. An old school journalist who loved nothing better than to dig out a tale who someone somewhere wanted buried.

Both lovable and cantankerous, he still followed Birmingham and national events closely, enjoying nothing better than to scheme and gossip at the bar while putting the world to rights. Predicting both Brexit and a Donald Trump victory. A life which richly deserves a classic wake but sadly coronavirus means that at best it will be delayed for months.

Former City Council Deputy Leader Andy Howell commented: “David Bell was one the last great municipal journalists, perhaps the very last. He could sniff out insincerity at half a mile. Treat him with respect, be honest with what you knew and could reasonably say and he treated you in a similar way.

“Over the years I became very fond of David. Our political views were very different. To him I was a wet, Guardian reading leftie; I regularly pointed out that his own views were to the right of Attila the Hun. He was a private person but every meeting with David, and every Guinness shared, was one of fun and laughter. The demise of the municipal correspondent — who held councils to account — has left us all the poorer.”

City Council policy adviser Tony Smith said: “David annoyed and antagonised many in local government over the years and he remained firmly and resolutely ‘unreconstructed’. But underneath all of that was his innate sense that local democracy mattered. He also had deep rooted values of fairness and honesty and a straightforward northern sense of fair play.

“Above all, David was a great story teller, whether in the pages of the Evening Mail or sitting on a bar stool in the Wellington or the Old Joint Stock. He had a mischievous sense of humour and adventure and told his tales with a twinkle in the eye that was irresistible. The gossip was always flowing, and the tales of his misadventures on foreign trips were legendary. He never lost his boyish charm and I will miss him.”

A member of Sandwell Golf Club, he followed Hartlepool United football club, and liked a bet on the horses. A Times crossword lover – no more Ding Dong (4).

One thought on “David Bell – an appreciation”