Andy Munro comments on events of the past week.

I think things sometimes need a bit of balance at the risk of being subject to a torrent of vitriole although I think everybody agrees that what happened in the US with their bombastic approach to policing has to be completely deplored. However, George Floyd was no saint so why not cut out the outpourings that make him out to be one?

Demonstrations in the UK are understandable, but again there is no excuse for violence and the toppling of the statue was something that should have been done peacefully and democratically with the mayor of Bristol taking the lead. It also raises 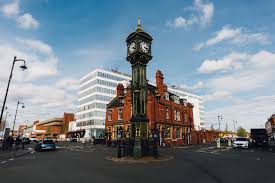 a debate whether we should erase all statues of anybody that is imortalised when they’ve committed crimes against humanity. If so, should we take down the Jewellery Quarter clock on the basis that the Chamberlain family are not the best example when it comes to the history of the British Empire?

The alternative view is that we shouldn’t erase history like this as it serves as a reminder and a warning to us all to see memorials of figures, even if they have been morally questionable.

What’s to be done? There is no point in the general vacuous moaning that’s taken place, but instead there needs to be a proper plan of action put together to address the legitimate concerns of the BME community. I say legitimate, because as with all protest movements, some of what they are arguing is debatable. Are more young black people stopped because of pro rata crime figures, or do these figures reflect an increased level of targeting?

It’s also the case that young people need a decent steer and discipline when they go through the ‘lively’ stage, and it’s often the case that sons can do no wrong in the eyes of some people in all communities.

As a 69 year old white bloke maybe I’m out of touch, but I was brought up in what became the Balti Triangle, managed and played for football teams where the vast majority of players were black and Asian, and as a manager the only aggro I tended to get was from white players in the squad. I won’t trot out the platitude that “all of my best friends are black” but, yes, I’ve got a lot of mates from BME communities although that’s a coincidence because they’re just good people.

Fnally, I would say that whilst I hope I’m not racist, the spectre of racism isn’t all one0way and I’ve been in a few hair-raising situations myself, based on being a white guy. Let’s face it, there are numpties in all creeds and colours.