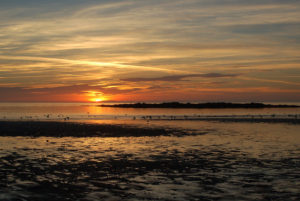 The sea sighs, in and out, in and out. I deliver food each morning and walk along the shore. It’s mostly for older folks or those unable to get to Paul’s village shop in Strathcarrick.

I follow this Scottish shoreline the same time each day. Today the tide is low, the bay is holding its breath. Next week, at the same hour, it will be breath out and the tide will be full, hiding the McGowan rocks which is home to preening cormorants and bossy swans who own the bay. Night after night, they’ll watch the western sky burn with sunset as above.

I stop at Victor’s little wooden home off a side passage. He gets his rolls and papers. His electric fire is knackered and lockdown means no parts are available. I deliver an oil radiator. Victor hobbles out of his cabin on his Zimmer frame, checks the  weather and takes ownership of the heater.

Next door is Margaret-2. That’s to differentiate her, of course, from Margaret-1. Her huge mastiff barks and lunges at me as if it would crash through the glass front door. “She’s ok, really,” Margaret-2 promises. “Just frisky.”

The dog’s huge jaws are like a cartoon steam shovel waiting to rip anything to shreds. I’m not too sure about this huge pooch. Neither is Victor: “I’d take the wee one for a walk,” he says indicating the busy little terrier that accompanies Ms Steam Shovel. “But that one…” he nods to the mastiff, “…that one I’d take to the pub.”

Further up The Beach Road are the delightful neighbours, May and June. Now, how did that happen that they’d be living in joined cottages that look west towards the sea?

June is the more sociable. “All we need is a July or an April to move in.” She loves her white bread and the delivery is somewhat squashed because the loaves are so soft. She’d doesn’t mind. May waits for her Glasgow well-fired rolls, her Daily Express and the weekly Strathcarrick Gazette. June wants to know where her eggs and cigarettes are.

I arrive back for 9.15. I’m invited to my first virtual funeral. AH’s mother was in her mid-nineties when she died in her Cornish nursing home. The attendance was limited to only two participants. So, AH invited all and sundry to a video link for the fifteen minute service.

I dial in. There was A and his sister at the podium in a locked-off long shot. The rest of the hall was empty. This solitude added to a dignified and eloquent farewell from a brother and sister, from a son and daughter.

Of course, there was a simple austerity to the funeral. But, as AH suggested, it worked. People who were unable to get to Cornwall or were incapacitated or frozen into a schedule would have ordinarily missed the service.

But the family, I am told, was upbeat about this farewell by laptop. More people ‘attended’ than would have been normal, they felt. And I think once this crisis ebbs away, the virtual funeral will become more popular and acceptable as we say goodbye to those who leave us.

2 thoughts on “Covid chronicles: Four deliveries and a virtual funeral”