Dave Woodhall comments on a disgraceful piece of gutter reporting.

There are many reasons why I won’t buy or look at the Sun. As a football supporter I hate it for their Hillsborough coverage, and as a Villa supporter I particularly hate it for the way they abused Graham Taylor, even reveling in remembering their appalling words as news of his death broke and the rest of football remembered a decent man mocked and ridiculed by gutter journalism.

As someone who tries to retain a sense of decency I loathe the way they encourage division in society, foster bitterness, confuse patriotism with xenophobia, scapegoat the less fortunate and treat compassion as weakness. In a decent world there would be no place for such an enterprise. 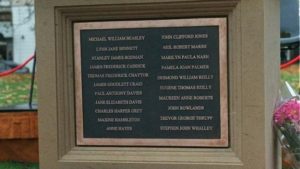 And on Monday they went a step further, in doing so casting a slur on our city and on some of its most worthy inhabitants.

I’m not going to link to the story or repeat it, because the story itself is best ignored, but in their coverage of events surrounding the game at St Andrews on Sunday afternoon, they claimed that the police “had their hands full” with what they described as a “protest by the campaign group Justice for the 21”, saying that this supposed demonstration was “eventually restrained”.

The truth, something the Sun has traditionally had problems understanding, is that Justice for the 21 was holding a collection to raise funds to meet their legal costs for the inquests into the bombing, currently being held. The fundraising was taking place with the permission of the Blues, the co-operation of the police, and raised over four thousand pounds. There was no need for police to get involved with the fundraising and certainly no need for restraint. Amidst the events of the game, the Justice for the 21 collection was probably the only thing that met with approval from everyone in the crowd.

If one thing has to be taken from Sunday afternoon, it’s that there are more important things than football. The Sun has insulted the city, and in particular it’s insulted campaigners whose courage and fighting spirit are an example to all of us. Of course, they have form for this sort of thing. Their coverage of the Hillsborough disaster means that not only does the newspaper (a loose description) have negligible sales on Merseyside, but it’s almost as difficult to find a newsagent stocking the tawdry rag as it is finding anyone shortsighted enough to buy it.

We should do the same. Don’t buy the Sun, tell everyone you know not to buy it, ask your local paper shop not to stock it and make sure they all know why. And if you’re a former Sun reader, send the money you’re saving here

2 thoughts on “Total eclipse of the Sun”