Richard Lutz takes to the streets filled with anti-Brexit protesters and latte. 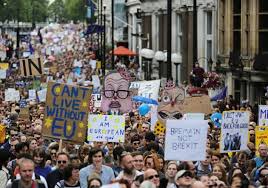 My son reminds me that the last time I had been to a political rally was one of the Durham Miners bunfights with Michael Foot on the stage. That’s in the early ’80’s.

Whew. Well, time to join the assorted 700,000 and rip up the wine bars and discreet palatial homes in central London for the anti-Brexit bash. Aux barricades, watch out for the tricky pavements and don’t lose that hearing aid.

It was a gentle, albeit noisy, four mile stroll through the more salubrious parts of the capital. A huge screen in Parliament Square meant that hundreds of thousands could hear big voices…Chuka Umunna, Anna Soubrey, Sadiq Khan …all calling for a second EU vote.

But it was who WASN’T there  that got me. Where was the Labour front bench, with an open goal of a disoriented government and a sympathetic crowd?

No Corbyn, no shadow chancellor John McDonnell, not even the shadow BrexIt spokesman Kier Starmer. Obviously, all too busy opening leisures centre in Norwich or spending more time with the family.

More obviously, the shadow front bench was whipped to avoid the demonstration. A bad mistake.

Of course, I doubt this mere crowd of three-quarters of a million folks (and their kids who are future voters) will change this fogbound, dogma-ridden May government.

The brainless, tiny-minded Daily Express reminds us every day that 17 million people voted to leave Europe. But that was more than two years ago and a lot of vomit-stained rhetoric and lies have floated past us since then. There is no doubt in my mind that not many Remain backers would have changed their minds since the referendum to leave the EU. But, a heck of a lot of Brexit supporters would vote to stay inside the EU.

Will anyone listen to the voice from the streets? I don’t know. I thought about it. But my mind wavered when former England manger Roy Hodgson sat next to me in the waiting lounge at Euston (first class, natch) as I drifted back to Birmingham, the tattered remains of my banner drooping, my cobblestones unthrown and the cafes so busy I didn’t even get a sip of cinnamon latte.

But I did get to sit next to Roy, now the Crystal Palace manager, as he headed north to the  Everton match. I didn’t ask him about Brexcit.