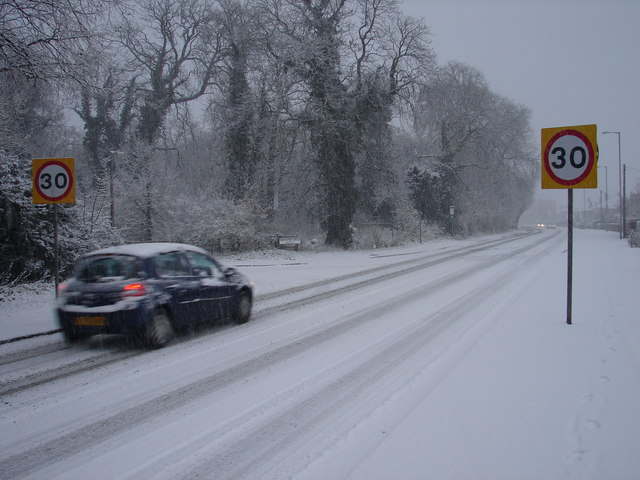 For reasons too boring to recount, I went for an MRI. That’s the medical diagnosis that uses magnets to take pictures of your insides. You put your head or body into a giant tube and slowly the scans are taken. It is effortless, painless and consumes between 20 and 40 minutes of your life.

What I didn’t expect was the noise. Yes, they give you earplugs and can pipe music into headphones. But, inside the tube, there was an inescapable audio circus of grinding gears, groans, beeps, bells, whistles and sirens. I couldn’t figure out if it was a joke or a parody of a bad 1950’s sci-fi movie with the mad scientist crazily pulling knobs and gearsticks to summon up a monster from the 51st century.

But it was the normal MRI scanning noise. That said, the session over, it took me two hours to drive the three miles back from the hospital.

And that’s because of the snow and ice. It was the storm that has stopped Britain. But could have also been a summer’s day in Minnesota. In my city in central England, it was about four inches of the white stuff. Trains stopped, roads clogged, businesses shut and any problem anywhere blamed on snowfall. Including my two hour crawl in first gear as city traffic formed rigid columns.

Ultimately, it meant lots of TV watching and radio listening. And if you are within a million miles of Uk-ville, that means lots of static about Brexit.

Britain leaves the EU in a year. And the public, whether engaged or bored stiff, are mightily confused. Just what has been decided? And what has to to be decided? No one really knows, though we are bombarded with sureties from the political classes.

The MPs, the lobbyists and their kinfolk are part of the juggernaut shambles. Because, as the pro- or anti factions chew over the Irish border question, trade laws and judicial structures, they use appallingly non-understandable language:

You get the idea.

Surprisingly, Prime Minister May, known for her own vague vagaries, has this week pounded the table and talked pragmatically about accepting Hard Facts. That’s code for Compromise. This, as opposed to her initial Hard Brexit tough stance. One friend languidly proposed that once the negotiations end, all will be the same: business, money, law, immigration, finance.

To Beeb or not to beeb

A final word: during the interminable Brexit coverage, one of Britain’s top political hacks stood up at a live press conference and introduced himself as “Robert Peston from the BBC..”

Too bad he left the corporation a year or two ago and now pockets hundreds thousands per year for the BBC’s main competitor, ITV. C’mon Bobbo, wake up, wake up…

It must be the snow.