Birmingham MPs call on Legal Aid Agency to reverse its refusal of Legal Aid to families of pub bombings victims.

Birmingham’s nine Labour MPs have today written to the Chief Executive of the Legal Aid Agency calling on him to reverse the Agency’s decision to refuse Legal Aid to the families of ten of the victims of the Birmingham Pub Bombings at the Court of Appeal. 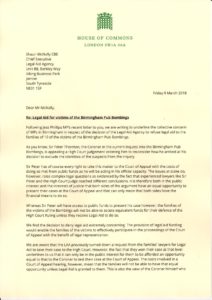 The families are contesting an appeal by the Coroner, Sir Peter Thornton QC, against a High Court ruling that he should reconsider his decision to prohibit the identification of suspects during the reopened inquest into the Pub Bombings. 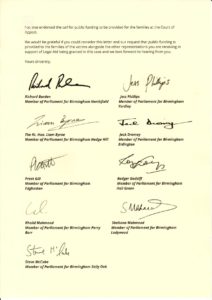 Lawyers presenting the Coroner’s case will be publicly funded but, following the Legal Aid Agency’s decision, the families will be denied equivalent funding to present their case.

Northfield MP Richard Burden MP, who has written the MPs’ letter to the Legal Aid Agency, said today: “The question of whether or not suspects should be inventoried at the Inquest raises complex legal issues. That is underlined by the fact that highly experienced lawyers like the Coroner and the High Court Judge reached different conclusions.

“It is therefore both in the public interest and the interests of justice that both sides of the argument have an equal opportunity to present their cases at the Court of Appeal. That can only mean that both sides should have the financial means to do so. As the presentation of the Coroner’s case will be funded from the public purse, it must surely follow from this that the families should be granted Legal Aid to present theirs.

The force of this argument is underlined by the fact that Coroner himself has called for the families to be granted public funds to present their case in opposition to his appeal. All Birmingham MPs support legal aid being granted to the families of the Birmingham Pub Bombings victims and I hope our letter today will help convince the Legal Aid Agency to reverse their decision to refuse Legal Aid.”