Talking to pop manager Nigel Martin-Smith about his latest venture, boy band Yes Lad, and about his biggest.

They’re a boy band from Manchester(ish), there’s five of them and they’re managed by Nigel Martin-Smith. Sounds familiar? So says the man himself, who tells us why he’s treading a familiar path.

“It’s been a while. The last proper boy band I worked with was obviously Take That and I thought it’s been a long time since a big act came from the north of England. It’s been a bit of an eye opener since 25 years ago when I was getting Take That started. That whole thing has changed; back in the day I broke Take That through a mixture of under-eighteens clubs, teen magazines and music TV.

“Now there’s no under-eighteen venues, hardly any clubs in fact, no magazines like Smash Hits and no music TV apart from MTV and the trouble is that music TV shows are all super-cool and they look down their noise at anything that’s seen as commercial. It’s as though you have to be off the dole or look a bit different like Rag n Bone Man to get anywhere. Teenage girls are still teenage girls and they like the same things but it’s hard to make them aware of a new act. 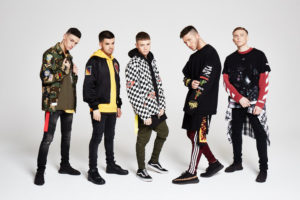 “The band have been going a couple of years, they’re a real band and they’ve been touring but now the big labels are starting to get interested. There’s been a lot of effort by everybody but we’re getting there”

You must have had plenty of offers, so why Yes Lad and why now?

“After Take That disbanded I still controlled their back catalogue, because it was important for me to keep the integrity of the material so it didn’t end up being given away in a CD with the Daily Mail or used to advertise something like toilet roll. I was very strict with where the material went. I said to them that the wheels will start to come off eventually and when that happens it’s important to know when to walk away, because if you do it at the right time you can come back to where you left off. And that’s what happened – Robbie left and we went on for a year, then other cracks started to show so I said to the band that it was time to end and that’s why we went out on top.

“Then it was my idea to put the band back together again. We were just going to do the documentary that relaunched the whole thing, I was doing that with Simon Cowell and we were going to release a greatest hits album. At the time Gary Glitter was doing his Christmas shows so I said to the band that we could do a Take That Christmas tour because I was sure there’d be a market for it. We had a meeting round at my house and one or two of the band weren’t keen but eventually we did the documentary on ITV, the album came after that and eventually a tour was arranged, then Jason said they were sacking me just before the tour started.”

“I’d always had an agency called Nemesis based in the north-west that had a lot of young acting talent so I thought why not do it again? A couple of the lads, Lewis and Cian had won local radio station talent competitions and opened a show at the Manchester Arena. I introduced them to each other and they both wanted to be Ed Sheeran but the trouble with that is you have to work at it for ten years and I wanted to get a band together for the lads, to tae into youth culture”

Boy bands. Aren’t they all a bit nineties?

“There’s always been boy bands. The Beatles were a boy band, the Bay City Rollers and the Osmonds in the seventies, Wham later, but what happened in the nineties was that Take That were so huge. My background was in television so rather than just working on getting the songs right I worked on the band so that when they did interviews 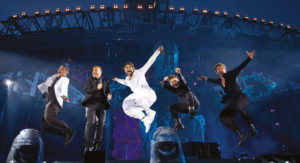 they came across really well.

“This was before reality TV so Take That were before their time and they were such a good act, great songs an huge following, they could sell themselves on screen and that exploded the phenomenon of boy bands. There will always be a market for boy bands because they represent youth culture. You have acts that young lads are into and acts that young girls and the gay community are into. There will always be a market for that thing.”

Has the explosion of reality TV and modern celebrity culture meant that the bands themselves behave any differently now to how they used to?

“I don’t think so. When I was looking for singers to join the band I did what I always do – I look for people with charisma, who have got great screen presence. You’ve got got a host of celebrities now who aren’t particularly good at doing anything except appearing on TV – TOWIE is a great example – famous for no particular talent. That’s partly what I look for, people who have the ability to talk to a camera like they’re taking to a mate and who can do the job when they’re on TV. Yes, I look for talented musicians or singers but I also want people who look good in front of the camera. That’s why you’ve got a band in Take That who don’t mind living their life through a lens.

“But ultimately bands and their audiences don’t change. Songs are about four chords and the audience will react in the same way as always. The key is the right song.”

You did have a bit of a disagreement with Take That for a time.

“I was never going to say anything while I was involved with Take That but they were such a major part of my life. I’ve never been negative about any of the band members. When they’ve said things about me I ignored them but Robbie Williams wrote song lyrics that were so damaging that I sued him. He was saying things like I was getting a million pounds a show and when I was with you I was only getting fifty thousand. Well, when he was with me was years ago and the band was just starting out. That’s the way it was with the band; Robbie and Gary would be at at each other’s throats then they’re the best of friends and I’m the bad guy.”

Yes Lad will be playing the Institute 3 soon. I have to ask you about any memories you have of the city with Take That.

“Birmingham was where we first broke. They’d had a couple of records out that hadn’t done much so we were doing a schools tour to get them off the ground, anywhere there might be an audience and we were at Merry Hill when I got a phone call on one of those massive old mobiles that It Only Takes a Minute was number 25 in the midweek charts. We went off and had a balti, I’d never had one and there was all this green stuff on top. It was coriander; I’m massively into curries but I’d never had one like that. I hated it.”