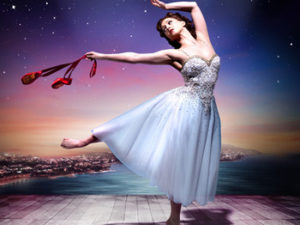 Sir Matthew Bourne’s acclaimed production of The Red Shoes has danced majestically back to the Birmingham Hippodrome by popular demand after playing to full houses earlier this year.

A masterpiece in dance theatre, its story of three artists driven by obsession, love and jealously is performed with such passion and belief that it grips you all the way to its shocking conclusion.

The show is based on the Michael Powell and Emeric Pressburger 1948 film of the same name starring Moira Shearer, Marius Goring and Anton Walbrook, which in turn was inspired by the Hans Christian Andersen fairytale of the girl forced to dance to the point of death by her red shoes.

A theatrical homage to the world of ballet and the classic films of the ‘40s and ‘50s, Bourne’s production races along so fast that scenes change with barely a breathing space. One moment we are at Covent Garden for rehearsals of Les Sylphides, the next we are on the sands of the French Riviera with dancers playing beach ball, and then in some cheap East End digs.

Through the imaginative use of a revolving proscenium arch, we follow the Ballet of the Red Shoes from both a backstage and audience point of view in an illusion that wittily makes us part of the action.

Wit abounds in a cast of well-drawn characters, not least ballet impresario Boris Lermontov, danced superbly poker-faced on opening night by Sam Archer, so resentful of a romance between his ingénue and his composer threatening his creative plans.

As the lovers Victoria Page and Julian Craster, the flame-haired Ashley Shaw and ardent Julian Craster bring an electrifying chemistry to their dancing in a relationship that builds up and breaks down in direct proportion to their commitment to their art.

The scene in which Page tries to revive her fortunes through the music hall, alongside some amusing but mediocre variety performers is one of the most touching in the show.

The cheap smokey atmosphere, contrasted with the earlier opulence of the Monte Carlo Opera House, also highlights the extraordinary attention to detail by set and costume designer Lez Brotherston and lighting designer Paule Constable that make the production such a compelling spectacle.

Add the wonderful film scores of Bernard Herrmann (you would never have guessed that Citizen Kane and Fahrenheit 451 would make such great dance music) and you have a treat that you will want to feast on forever.

Matthew Bourne’s production of The Red Shoes continues at Birmingham Hippodrome until July 22nd (including a final day matinee).