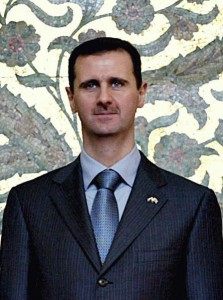 A new Med naval base for Russia could be the reason that Moscow is bombing Syria and killing its citizens, writes  Richard Lutz

Moscow has confirmed that it’s in the final stages of putting a permanent base in the Syrian harbour city of Tartus.

Now seemingly, we have the ultimate reason why Putin decided to send in his hardware to help the mass killing of Syrians from the air,  and that is to have a long term base for his gunboats in the Mediterreanan.

For the last 60 years, since the end of the Second World War, the Kremlin has been blocked from this move, though it has a 40 year old supply port in Tartus.

But it is outmoded and inadequate. This latest agreement will upgrade Tartus to modern permanent status. The deal between Putin and President Assad (see above) will allow a Russian dream to come  true.

Newsweek reported: “The {Russian} Ministry of Defense confirmed the delivery of S-300 anti-aircraft missiles to Tartus last week, at a period of rising tensions between Russia and the U.S.-led coalition in Syria.”

The magazine added that there were no more details what additional armaments or ships would be delivered to the port. But, it commented, Russia’s Ministry of Defense has already “confirmed reinforcements in Tartus and hinted at extending military influence abroad.”

Ramifications of a large Russian permanent naval base on the Syrian coast are not yet known. But it does mean that Putin can tick off another must-do from his list to re-ignite the might of the Russian oligarchy outside its  borders.

The pay-off was to help Assad bomb his own people. Sadly, tragically, they have achieved their naval goal at the cost of the mass murder of trapped citizens in the rubble of Aleppo.

One thought on “Reds head for Med”