Richard Lutz is at the Birmingham Rep for the John Buchan classic turned hilariously on its head. 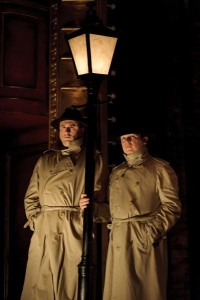 I bet that you may know about the spy novel 39 Steps and the Hitchcock movie. But you have no idea what the 39 Steps actually are. My friend Bill did when we went to see this play. Good on him. I will put a fiver on the table no one else does.

The three films of the John Buchan 1915 story used the title and never explained the meaning of the title. But who cares?

This is a four-hander telling the tale of the slightly dim Richard Hannay as he falls deep into a dastardly plot to do something bad to Old Blighty. He begins a cross country trip to the Highlands from his London flat and meets spies, good guys, bad girls and some very suspicious Scottish B&B owners.

The quartet of actors are really giving you two stories for the price of one. The first is an outdated plot that may have been trenchant 100 years ago but is nowalmost indigestible. 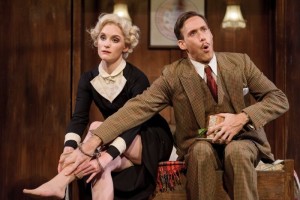 And the second, thankfully, is watching 4 very talented actors buzzing around the Rep  playing about 400 roles.

It is madcap, full of laughs, with tongue firmly in cheek.

Richard Ede plays `Hannah, a very clubbable chappie who bungles his way into a spy adventure. Olivia Green shows her stage chops portraying everything from a Mati Hari spy, to a Highland farmer’s wife to the lovely ingenue handcuffed to dumb but nice Hannay.

The production is hampered by some dubious sound. The levels at times seemed to be set wrong with background music sometimes drowning out quick witted dialogue. But it doesn’t get too much in the way.

And, as for the meaning of the 39 Steps title… it’s still a blessed mystery for most of us.