With news of a threat to close Hall Green dog track, Steve Beauchampé looks back on this suburban multi-sport venue. 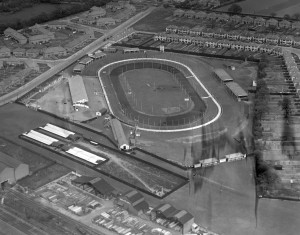 Hall Green’s was a standard five-dog track, approximately 500 yards in length and during the inter-war years crowds of 30-35,000 were commonplace on its high-banked terraces. A distinctive Totalisator Odds Board was constructed in 1946 (replaced by the current version in 1970 when a restaurant was also opened and substantial alterations made to the grandstands and enclosures), but with the advent of television in the 1950s and the legalisation of off-course betting in 1961 attendances fell to just a few thousand.

Even smaller crowds watched Hall Green Amateurs FC who used the central grassed area of the race track oval between 1951-1965, often performing to around 100 spectators despite being a relatively successful non-League outfit who for a time challenged Moor Green’s dominance as Birmingham’s leading amateur club. Despite this, shortly after their departure from York Road, The Hammers disbanded.

A prominent feature of Hall Green was the Kennel Block, which housed around 200 dogs along with the on-site accommodation for the kennel hands. Closed in the mid-1960s and demolished in the early 1970s, replaced with cricket and indoor bowls facilities constructed along with warehouses, a cash and carry store and a wood yard (only the latter remains today).

While the city’s other tracks struggled (King’s Heath was closed in 1971 and the original Perry Barr track shut in 1983, with the sport transferring across Birchfield Road to the old Alexander Stadium), greyhound racing has continued uninterrupted at Hall Green. Today, crowds of between 1-2,000 are the norm, and spectator viewing facilities essentially consist of one enclosure housing a lounge and restaurant, inserted into the rake of an original grandstand, set behind a bank of terracing, Onto these steps a few punters venture for a last minute flutter with the half dozen or so remaining on-course bookies (who once numbered around 40-50) and to watch the 30 or so seconds each of the sixteen or so races take.

However, most spectators remain indoors, seated at tables during races, viewing the action on television screens, with betting facilities and refreshments brought to them. On the back straight, a second grandstand (previously the site of the old main grandstand) dating from 1974 now houses corporate facilities and the 21-table Stadium Snooker Club, whilst there is also a 47-bedroom hotel on site. In 2002 Hall Green became the first track outside of the South East to win the GRA Racecourse of the Year title. And for now at least, Birmingham remains the only UK city other than London with two operational dog tracks.

Although Hall Green was specifically built as a greyhound stadium, from August 1928 it hosted motor cycle speedway racing, one of over sixty tracks to open in Britain during the late 1920s for this emergent Australasian import (where it was known as dirt track racing). Fast, noisy and with many of the bikes and their components manufactured locally, floodlit meetings (at a time when the football authorities were resolutely opposed to lights) became a great attraction.

The sport continued fitfully until in 1938, and following the death of a rider in August 1937, a court injunction was taken out against speedway and Hall Green’s licence was revoked and the metal horses growled in Hall Green no more. It appears that greyhound racing is also soon to disappear, replaced ironically by housing, the existence of which nearly ninety years ago made the construction of Hall Green stadium such an attractive proposition.

Steve Beauchampe is the co-author of Played in Birmingham (Malavan Media, 2006) which charts the history of Birmingham’s sports grounds and sportscapes and from which the front page image is taken. More details at www.playedinbritain.co.uk