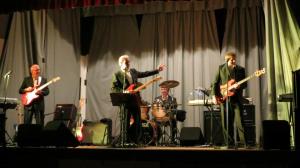 Award-winning West Midlands band Out Of The Shadows will play a special concert in King’s Heath on Sunday 9th November to raise funds to create a new Ritz Community Arts Centre and Pop History Museum on the site of the old Ritz Ballroom.

Overwhelming public support for the idea of creating a new Ritz Community Arts Centre saw over 500 people agree to pledge £10 a year in less than a month enabling organisers to apply for charitable status and seek Lottery funding.

The iconic ballroom run by legendary Irish Couple Ma and Pa Regan was at the centre of the 1960’s Brumbeat scene hosting some of the earliest performances by local groups the Move, the Moody Blues and the Spencer Davis Group as well as the Birmingham debut of the Beatles, the Rolling Stones, Pink Floyd and the Who. It closed in the early
1970’s and was a Cash Converters shop before it was destroyed by fire in March 2013.

Kings Heath residents Bob Prew and Ken Whittaker along with local businessman Stan Hems are part of aconsortium aiming to return live music, dance and comedy to the site.

Bob Prew said “Birmingham has an amazing musical heritage that we don’t celebrate as much as we should. And equally Kings Heath has played a pivotal role in Brum’s pop music scene that is not recognised as much as it should be. The Ritz Ballroom was at the hub of the 1960’s music explosion. UB40 played their first ever gig at the Hare & Hounds and Duran Duran and Ocean Colour Scene made some of their first recordings at the Highbury Studio. By combining a museum with a performance and rehearsal space, we hope to inspire a whole new generation of musicians and other performers to emulate their success”.

Advance tickets for the benefit concert cost £3 from Kitchen Garden Cafe or www.wegottickets.com Any remaining tickets will cost £4 on the door.

Anyone who wants to find out more about the Ritz Community Arts Centre project should contact info@kingsheathwalkoffame.org.uk