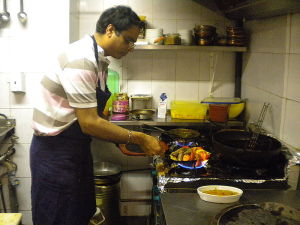 Richard Lutz sits down, rolls up his sleeves and digs into a new Balti Controversy.

School’s out. Work’s finished. It’s Friday night. Another week over so…

The old Balti Gland starts welling up. The weekend starts here and all that nonsense.

The urge, the hit, the need to get a balti curry down your neck in Birmingham. It’s not so much a tradition as a physical craving that starts in that gland – that place where the taste buds are juiced up by the citywide DNA somewhere just in the back of the throat.

It’s gotta be a balti.

And that’s the law in Birmingham. The smell doesn’t simply emit from the hundred of cafes and joints in the city. Sometimes it just seems to invade the senses from the air, from the streets or descend from the winter mists.

It’s Birmingham. In one square mile of the Sparkhill neighbourhood alone, it’s estimated there are at least 50 places serving up your nightly balti.

Now superchef Madhur Jaffrey has said that the balti phenomena is just plain dead. it was ‘just a craze.’ 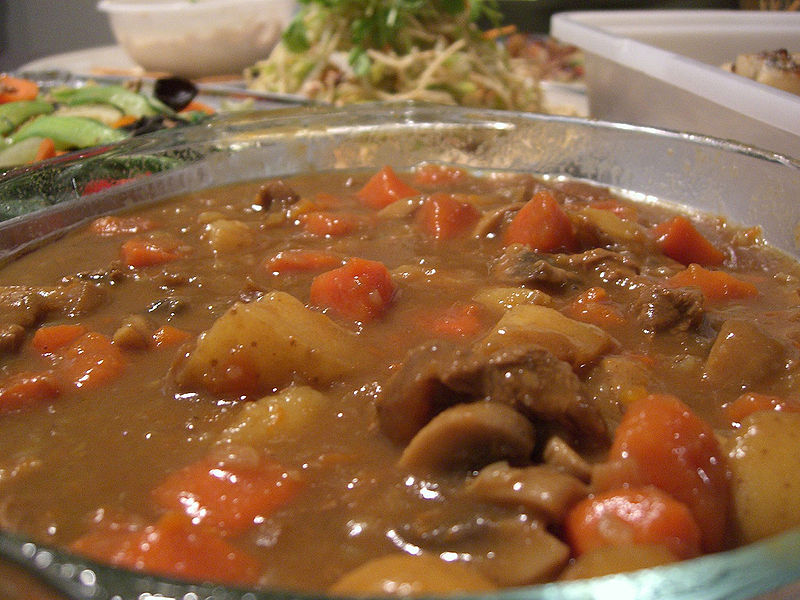 This throwaway line probably runs right past a good majority of folks in Britain. But for  the second city, balti curries are as constant and integral as blood, running water or electricity. It is a given.

So forgetting Ms Jaffrey for a minute, let’s talk a look at what this food is.

Yes, it is a simple curry. But the word ‘balti’ comes from a Pakistani dialect word for a bucket or a bowl- the utensil that it was served in at weddings and family parties. It is cooked as a curry but then super heated for the last ten minutes to intensify the flavouring.

It probably emerged during the sixties when Pakistani men came over without their families to work in the motor, textiles or metal-bashing sector in the burgeoning West Midlands where there were so many jobs.

Some Pakistani guy from Lahore, Mirpur or Jhelum probably realised he could make a living opening a caff and whipping up a curry and a cup of tea for  the boys off the shifts to remind them of home in Azad Kashmir or  thereabouts where a large part of the workforce came from. Simple food with chicken, lamb or vegetables would do, sometimes spiced with astifida.

Then the students from Aston, UCE or Birmingham quickly realised they could get a decent meal for about a £1 and the Moslem owner didn’t mind if they brought in their own beer or wine. And if you didn’t want to bring in something, there was always an offer of cold water in those funny metal cups.

Whether the first ‘balti house’ was on Ladypool Road or Stoney Lane seems neither here nor there. The places sprung up and when I came to Birmingham in the early eighties, they lined the streets in Sparkhill or Alum Rock.

You could still fill your stomach with a balti and a giant naan for under £2. Kids loved it: after all, you got to eat with your hands and just scooped the food up in the hot bread. Plus there was that sweet lassi that soothed the burning palate.

And as my sons grew, Saturday morning was a special deal as they gobbled up cold balti or onion bhajis if it was a takeaway meal the night before. Hey, forget eggs, toast, porridge. Balti in the AM to kick off the weekend.

The trade became big business. I remember a friend coming up from London just to eat Birmingham baltis. The East End just wasn’t good enough. Then, some of the marketing gang re-named the restaurant area The Balti Triangle and prices went up and, hey, they even had a tornado there about a decade ago.

So, it evolved and changed.

The way I see it, the original  owners got old, and handed the balti houses over to their kids who got their degrees in accounting or business and landed the right loans and upgraded the cafés into restaurants. It hit the family trade and then the suburban market …and away it went. One of my favourites, on Stoney Lane, originally had that cracked glass over a formica deal with the sink in the corner of the restaurant for washing the oily food off your hands. Then came the second generation and now it is all sexy silver and black decor with flames throwers at the front entrance and loads of Asian hen parties fill the place and waiters in designer uniforms swish around the place  as chefs cook away in an open plan kitchen.

Ms Jaffrey may feel balti food is ‘just a craze’. But in Birmingham and, of course, other big cities like Leeds, Manchester, Bradford and  parts of the capital, the food still fills a stomach and makes for a roaring trade. Yeah, individual places come and go as fads come and go. But just walk down, say, Ladypool Road and the  joints still line the street..some with great names: Balti Towers, …..I like that one.

A while back, I went to the Pakistani town of Mirpur where a lot of Pakistani families in the city originate from. People there knew nothing of balti food. To them, it is a British invention. Their food is hotter, more powerful and it seems obvious that the balti food has been calmed down a bit to make it more palatable.

A cafe owner explained to me back in Birmingham that they had to “Anglicise the food” or else it just wouldn’t sell. And another thing he remembered. He said all this eating with a big scoop of the freshly baked naan bread kind of developed organically. Originally, he and his staff laid a setting. But the Brits just wanted to shovel the food up and get it down their necks. He shrugged when he told me that. You go with the culinary flow, was his feeling.

Enthusiast Andy Munro (he wrote a book about the food, for god’s sake) comments: “It’s still a great dish when done properly and it’s still enjoyed by many..and it’s authentic. We are going for an EU mark for the Birmingham Balti.”

He feels it should be designated like a Cornish Pasty or a Melton Mowbray pork pie.

Maybe it will. Who knows? But right now, the old Balti Gland is starting to rev up so just pass the lassi or that minty sauce over on the other side of the table please.