Richard Lutz peers into the past and lets smoke get in his food.

We all have them. Piles of family photo albums crammed on a lower shelf, propping up a wonky bed, lining a wall, dust all over them.

Open them, and we do, and there, many times fading, are the colour histories of our lives. Smiles frozen, slightly bizarre hair styles, sons and daughters little, cute, perfect.

But you have to admit it’s all petrified by time now. The mobile phone snap has taken over. Why carefully frame a picture (with a total of 24 photos per roll of film) when you can bang off 100 shots without even taking a breath? Chuck out 99 (thumb in shot, terrible look on an auntie’s face, unpalatable thing on a background table) and at least one will work. It usually does.

Really, the old family album is a museum piece. Well… for most of us, at least.

Who looks at them now? Who even cares?

Well, my 88 year old mother-in -law for one. And probably hundreds of thousands like her. She’s warmly cared for by her four children and she likes nothing better than a nice cup of tea and a flick through those albums: Christmas dinners with bobbing heads of the grandchildren all eating trifle; Spanish beach holidays (with bobbing heads of the grandchildren all eating ice cream); a beautiful shot of her and my late father-in-law on their adventurous honeymoon in London in, I think, 1948; archive photos of her Manx family, some in naval uniforms; a wedding or two with the extended family. It’s terrific stuff and, as her memory fades, she is delighted to see them “for the first time”. 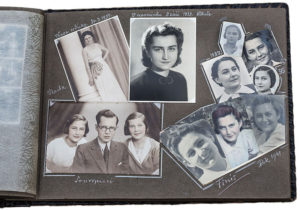 We went through our own stack and found glorious shots, some artistically set up and framed, others randomly banged out but somehow just as good in their own careless way. I especially like when I would take ‘arty pix’ thinking I was some kind of Ansell Adams or Cecil Beaton and just how bad they were and still are. Ahh gosh, you have to try.

So yes, there is power and beauty in those old albums. They are treasures of the past: Did I really wear that kind of tie? Was everyone so thin? Did our boys have such beautiful faces as babies? And, of course, who was that cocky son of a gun in the back row of the big family shot from way back when the world was black and white? No-one knows. Uncle Albert’s army buddy? That neighbour from Douglas? That forgotten deckhand off the trawler the family worked on?

No-one is sure. But he had a cigarette on his lips. And a nice fedora too. Which reminds me. For decades I had a nice framed photograph of my own paternal grandfather on the mantelpiece. My sister saw it, peered at it and said assuredly: “That’s not Grandpa George.” Well, who was it (is it) that’s been decorating my fireplace for years and years and years? No-one knows. I left it up. The guy is part of the family, part of my past. Even if he’s the old boy I confused with my grandfather as a youngish man with a rather dapper moustache and a nice great-coat.

I put the albums back in their dusty corners. I peered too long and forgot about the meal I was making. There’s trouble. I left the sweet potato in the microwave too long. Hellish smoke is erupting from the device. Warning lights are in a panic. When smokes get in your food…

Of course, the meal is destroyed, the kitchen smells like the charred after effects of a house fire; the burnt sweet potato is put out into shed to…well, I’m not too sure what to do with it. I open all windows and doors. I keep open the microwave door after I unplug it. One day, two days, the smokey smell lingers. The dead potato is still in the shed. God, I’m a disaster in the kitchen.

4 thoughts on “Long playing album and other tales”