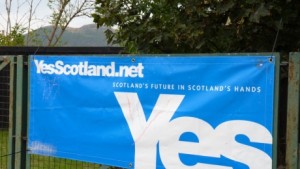 It was never really too close to call, other than for perhaps 24 hours or so about ten days before the referendum. The British Establishment closed ranks and the government orchestrated a successful scare campaign involving politicians from each of the three main parties, business leaders, the financial sector, economists, the print media and even the Queen, who by sounding as if she was saying nothing, effectively said everything.

No campaign leader Alistair Darling was all but retired, replaced by former PM Gordon Brown, whom the present coalition government have spent the last four years blaming for everything. That Brown played such a pivotal róle in saving the Union (and quite possibly Prime Minister David Cameron’s job) must rank as one of the biggest political ironies of recent times

Having briefly, and suddenly, drawn level in the opinion polls, the Yes campaign quickly slipped back a few percentage points and remained resolutely stuck there. Come polling day, fear and doubt won out, as it so often does in referendums. It might, however, have been closer if the Yes campaign had expanded their vision of an independent Scotland in an attempt to win over undecided voters, rather than merely repeating the same few arguments to a group who had remained immune to them for the previous two years.

Yet whilst a 55%-45% No vote was decisive enough for now, in all likelihood it is merely a pause on the road to Scottish Independence, as long term underlying trends surely testify. The most telling statistic is that so many Yes voters were under 30 years old, a generation who have grown up under the early stages of devolution and who want more.

They compare the relatively mature nature and practices of Scottish politics and the Scottish Parliament where centre-left social democracy holds sway and contrast this with the outdated practices of Westminster and what appears to many to be an increasingly insular centre-right political culture. They compare the civic nationalism of the SNP with the uglier nationalism of UKIP and the perennially angry right wing of the Conservative party’s and they know exactly what they prefer.

As if to help them reach a conclusion, within hours of the referendum result being declared, many in England who had courted Scotland and the Scots as being an essential and much-loved part of Great Britain rounded on them, by turns suggesting that the pledges, vows and solemn promises that Brown and the Conservative, Labour and Liberal Democrat leaders had given days earlier should be watered down or delivered only with caveats.

That these promises were made in panic and not thought through is self-evident, but the widespread call from English MPs for “English Votes for English Laws” is every bit as unworkable and problematic, and Labour leader Ed Milliband is right to insist that they be uncoupled from the additional devolutionary measures which so underpinned the No case in the referendum debate, and whose delay or denial would be viewed as a treacherous and unforgivable betrayal by many Scots.

In an era of increased Scottish Independence. issues such as the Barnett Formula (a mechanism for redistributing monies to Scotland) and the West Lothian Question (which asks why should Scottish MPs be allowed to vote on issues that impact only on England) may need addressing. Yet this must be conducted in a considered manner, not rushed through Parliament to assuage angry Conservatives and that portion of the electorate stirred up by the one-dimensional English jingoism of such unhelpful political rabble-rousers as UKIP leader Nigel Farage and the tabloids.

If they are not, then we will create a democratic proecess strewn with unworkable anomalies, unintended consequences and untenable practices. Two examples of this might include what happens if (or more likely when) the Prime Minister represents a non-English constituency (as with Gordon Brown, Jim Callaghan, Alec Douglas-Home, Lloyd George, Andrew Bonar Law) and how do we define and agree upon what is English-only legislation?

That this unedifying spectacle currently being played out amongst political groupings who days earlier were only too willing to trumpet their solidarity (from Better Together to Bitter Together in a matter of hours) must already be causing some No voters to wonder if they made the correct choice last Thursday.

Such doubts will be heightened by any partial disenfranchisement of Scottish MPs under West Lothian laws and the further fragmentation of the Union that will result as Scottish and English MPs increasingly operate in isolation.

Faced with a realigned parliamentary voting system that makes it easier for the Conservatives to hold power at Westminster, and a possible withdrawal by Britain from the EU in 2017 or perhaps 2022, then the alienation of a predominantly social democratic Scottish electorate from their insular neighbours to the immediate south can but lead to renewed calls for a clean break.

Given how far down that road Scotland has already travelled, to a point where a mere 6% swing would result in a majority for independence, it seems that what we were witnessing last Thursday was a final, albeit rather prolonged, hurrah for a Union that increasingly looks to be past its sell-by date.

3 thoughts on “Bitter together”