The police liaison officer who saw it all.

When Donna Cooper joined West Midlands Police in 1980 she never thought she’d be involved in two of the force’s most prominent cases of the following thirty years.

The official role of family liaison officer never existed like it does now and, simply because she was a woman, it always fell to Donna to liaise with victims’ families following major crimes. 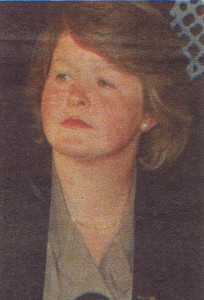 She was the only female detective based in Handsworth and by the early 90s was becoming experienced in working on murder investigations. But when the office phone rang one day in 1992, Donna found herself at the centre of one of the decade’s most high-profile crimes.

“I was at Thornhill Road station when the call came through for Stephanie Slater,” she said. “It quickly attracted media interest but I was oblivious to it all in the beginning as I’d gone with another officer to tell her parents she was missing.”

Estate agent Stephanie, then 25, had been kidnapped by Michael Sams as she showed him around an empty house in Birmingham. He held her captive for eight days and repeatedly sexually assaulted and tortured her, whilst making a ransom demand for £175,000 to her employers.

“I remained at the house from early in the morning to late at night every day she was gone,” said Donna. “The main thing I recall was feeling I knew Stephanie well before I even met her. Her family spoke of her all the time she was missing.

“I’d just left the house on the night she returned but gone home knowing the money drop was going to take place and I thought that the next day I was going to be telling her parents she was dead. Thankfully I got the call at around 1am saying she’d walked back in through the front door.”

Such was the media appetite for the story, Stephanie was put before the national press less than 12 hours after she gained her freedom, in a move that was later criticised. It was done at the time because the force had requested a media blackout and part of that national agreement was that journalists be able to speak to the victim should they be found safe and well.

“I was thrown in at the deep end with the press conference, as was Stephanie,” said Donna. “She was before the journalists before she had even spoken a word to us.”

Sams was jailed for life in 1993 for abducting Stephanie and for the kidnap and murder of his first victim, 18-year-old Julie Dart six months earlier.

For Donna, the case was a steep learning curve and the way in which FLOs are trained, appointed and supported has changed massively in recent years.

Police forces have also adapted the way in which they handle media interest in kidnapping cases following Stephanie’s experience.

“In the beginning you just did the role with no real recognition. I don’t even think there was a counselling department at the time,” said Donna. “When I was doing it I did not see the role as anything special, it was just part of the job. Now it’s a lot more official with paperwork and documents to complete. You also get the support you need.”

During the latter part of her career Donna completed a course to become an ‘official’ FLO but spent the majority of the training telling other colleagues about her own experiences.

In 2003 she was faced with the most difficult case of her career when she was appointed as an FLO after Letisha Shakespeare and Charlene Ellis were shot dead in Birmingham.

“I was liaison officer for Letisha’s family and also for Cheryl Shaw, a victim who was shot in the hand. It was completely different to Stephanie Slater – a child had been killed and was never coming home. It was going to take a long time to deal with.

“Her immediate relatives were okay with me but the biggest challenge was building up the trust of the wider family. When you’re an FLO there are certain things you know and can’t tell them, but you always give them the information first before anyone else.

“Dealing with the press was hard as the family were unable to go anywhere without being photographed or having journalists hound them. I had another officer with to assist at all times. This was certainly the most rewarding one I’ve worked on – from all angles, particularly being with the family when they got a good result at court.”

Four men were convicted of both murders in March 2005.

Now living in the USA with her husband, Donna retired from the force in December 2010. “I don’t consider being an FLO had an impact on my life any differently to being a police officer had an impact − I enjoyed my time and I like to think I made a difference to people’s lives. I hope both families in the cases I’ve mentioned would have a good word to say about me and that I did my job well, because that’s all you ask for.”