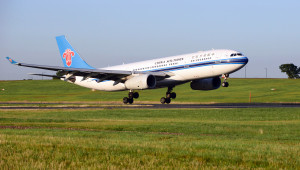 Birmingham Airport today welcomed the UK’s first direct flight from China into a non-London airport and inaugurated the use of its recently extended runway as the service departed for its five thousand mile journey back to Beijing.

Tourism Minister Helen Grant MP visited the airport to celebrate the historic flight and to congratulate Birmingham Airport on becoming the country’s first gateway to offer Chinese charter packages to the UK. The flight was welcomed by Lord Popat of Harrow, Government Aviation spokesperson in the House of Lords, alongside dignitaries from the city.

The China Southern A330-200 aircraft, operated by one of China’s leading tour operators, Caissa Travel Management Co Ltd, arrived into Birmingham Airport fully laden with 248 tourists venturing into the UK on organised package tours. The charter flights are the first in the UK to operate from China and the sell-out tours demonstrate the enormous demand for more flights between the two countries.

“This is a historic day for Birmingham, and indeed the Midlands region. Never before has a commercial airliner touched down on a runway outside of the Capital from China and we are enormously proud to be the first to make this happen,” said Paul Kehoe, the Airport’s Chief Executive. “We have invested more than £200m in recent years to create an airport that can accommodate more traffic, particularly to and from long-haul markets, and today we saw the first use of our runway extension for what it was intended: to provide direct global connectivity from the Midlands,” Paul added.

These flights are a result of three years’ collaborative working with Birmingham City Council, Marketing Birmingham, VisitBritain and the Government. The partnership forms part of the wider VisitBritain ‘GREAT China Welcome’ campaign, which was announced during the Prime Minister’s visit to China in November 2013 and aims to make the UK the most welcoming destination in Europe for Chinese visitors.

Chen Xiaobing, the President of CAISSA, said: “The successful launch of the first tour group not only presents CAISSA’s spirit of advancing and innovating with the times, which has attracted wide attention, but also suggests that this strategic and successful cooperation has opened up a new channel for travelling to England. In the future, CAISSA will continue to enhance the partnership and make greater efforts in promoting the further growth of Chinese tourist numbers.”

The runway extension, completed in May this year, provides airlines with unlimited take off range, allowing jets to fly direct to China and beyond. This puts Birmingham in an ideal place to become an alternative gateway to the UK for long-haul air travel.

China is currently one of the fastest growing visitor source markets for the UK tourism industry at a rate of 20% year-on-year over the past few years. The size of the market has tripled over the past decade, and it is forecast to continue to grow strongly for the remainder of the decade. In 2012 the Chinese visitor market was worth £62 million to the West Midlands economy, with Birmingham now the 4th most popular destination for Chinese visitors in England.

To mark this historic occasion, the Leader of Birmingham City Council, Sir Albert Bore, hosted a Chinese themed Civic Reception at Birmingham Council House for 150 guests. Sir Albert said: “This is an important day for Birmingham’s future as we directly connect our city with one of the world’s biggest markets. Birmingham’s reputation as a destination city is growing quickly in China due to profile-raising work over the past few years by many city stakeholders.”

2014 is a year of milestones for Birmingham Airport as it also celebrated its 75th anniversary on the 8th July. During this period, it has handled more than 200 million passengers through its doors.