Visit Birmingham has unveiled a new tourism campaign designed to boost the region’s cultural profile, as part of its ongoing strategy to build on the 10 million visitors that come to Birmingham for arts and culture annually. 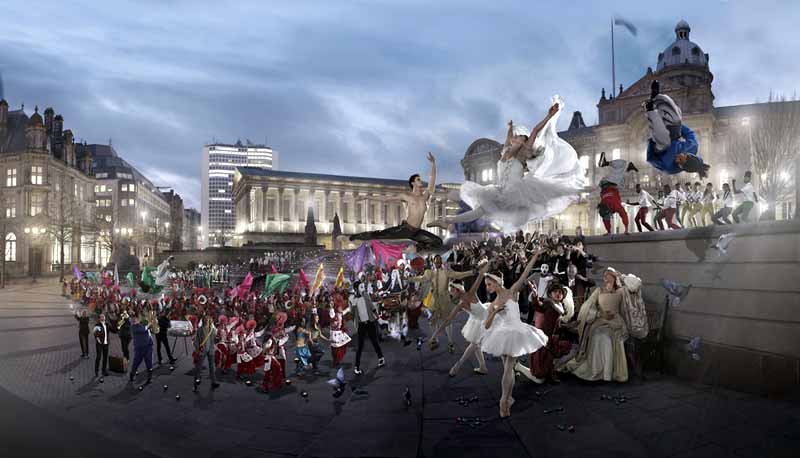 The ‘See More, Feel More’ integrated marketing campaign targets visitors to spend a cultural break in Birmingham, the Black Country and Solihull through a range of national advertising, creative PR, digital and social media activity. The collaborative campaign, running until the end of May, shines a spotlight on the large variety of arts and culture found in the region, from classical to contemporary and critically acclaimed to cutting-edge.

The campaign has been backed by the region’s cultural organisations with a range of local artists and performers, including musicians from the world-renowned City of Birmingham Symphony Orchestra and dancers from Birmingham Royal Ballet, profiled in advertising and promotional material that features Birmingham city centre as a dramatic theatrical backdrop.

The promotional drive will build on the city’s growing reputation as a creative hub. Nearly a third (30%) of tourists visit for its eclectic cultural scene and almost half (45%) of those who have visited in the last five years agree that Birmingham is home to world-class arts and culture.

Emma Gray, Director of Marketing Services for Visit Birmingham, the city’s leisure tourism programme, said: “With culture a key driver of tourism to Birmingham and the wider region, the ‘See More, Feel More’ campaign celebrates our rich cultural heritage . Ranging from street art to classical theatre and traditional music from the region’s diverse communities, the talented artists and performers taking part in this campaign captivate and enthral audiences across the globe.

“Birmingham is one of Europe’s youngest and most vibrant cities – hosting countless independent festivals, musical performances and sporting events each year. The city region provides a huge stage from which we can showcase and celebrate a new generation of artists.”

‘See More, Feel More’ profiles some of the region’s leading groups and artists in the worlds of dance, visual arts, performance and music.  Contributing artists include Aston Performing Arts Academy, known as the UK’s first ‘urban glee’; King Pleasure and The Biscuit Boys, a jazz band playing at the Solihull Jazz & Blues Festival this May (24-27); and Punjabi folk dance group Sansaar.

Stephen Maddock, Chief Executive of the City of Birmingham Symphony Orchestra, which features in the ‘See More, Feel More’ campaign, said: “By joining forces with Visit Birmingham to launch its cultural campaign, we are pooling the best talent in the city region to attract a new audience and entice previous visitors back here. The campaign will provide us with a stronger collective voice to shout about the exciting work happening here.”

Promotional activity will be supported by the launch of the Birmingham Look Book, a media briefing pack containing facts, stats, case studies and event listings for the year ahead to entice journalists to visit Birmingham, the Black Country and Solihull and learn about their diverse offering. In April, Visit Birmingham is also set to launch a campaign profiling the faces of the city’s ‘new beat generation’ – the rising stars in dance, music, poetry and a variety of other art forms  – which will encourage residents and visitors to the city to get involved  through digital and social media activity.

For further information on the wide range of cultural experiences available in Birmingham, the Black Country and Solihull visit www.visitbirmingham.com/culture.