Delivering the Manufacturing Advisory Service (MAS) contract and unleashing the region’s engineering potential will be the main aim of the new Chairman of the West Midlands Manufacturing Consortium (WMMC) it was revealed today. 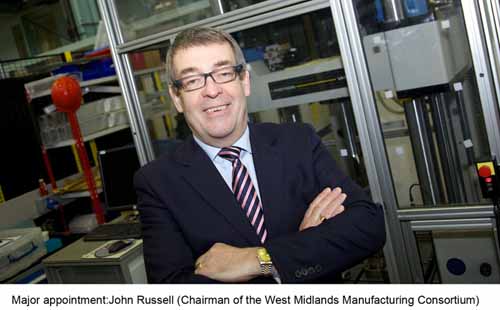 John Russell, who has held senior positions at Manganese Bronze, Harley Davidson and Land Rover, believes companies have a unique chance to take advantage of favourable exchange rates, a desire to buy ‘British’ and unrivalled investment in automotive, aerospace, medical and renewables.

The former electrical engineering graduate is keen to use his position at the helm of WMMC to help create the right climate for growth by ensuring manufacturers receive the specialist assistance they need to expand and create jobs.

He is determined to harness the innovation and entrepreneurship of West Midlands firms by strengthening thriving relationships between industry and academia so new technologies can be commercialised.

There are also plans in place to ensure business support continues to be easier to access, primarily by working closer with organisations such as the EEF, Warwick Manufacturing Group, UKTI, the Chambers and the LEPs.

“Manufacturers aren’t looking for hand-outs, they are just looking for help with key issues that are holding them back…this is where I believe we can make a real difference,” explained John, who played an instrumental role in marketing the launch of the iconic Land Rover Discovery.

“WMMC’s main role is to deliver the Manufacturing Advisory Service (MAS) in the West Midlands, North West and the North East and we’re currently supporting in excess of 4000 companies ever year.”

He continued: “We’ve got 25 advisors delivering strategic assistance on the ground and this ranges from help with efficiency improvements and lean, to sales and marketing support and guidance with longer-term strategy.

“This is having a real impact and we believe £millions has been added to the three regional economies as a result of MAS support.”

John has been involved in industry for more than 40 years, starting his career with Unipart, before moving to Peugeot Talbot Motor Co, the Rover Group and a stint in India as CEO of Bombay Dyeing.

His last role was Chief Executive of Manganese Bronze where he managed to overcome a difficult period in its history to transfer ownership to Geely with the view to ensuring production stays in Coventry.

“One of my first tasks as Chairman is to work with the Board to help WMMC diversify its core offer and attract new funding and business support projects.

“The early signs are encouraging. We are in the final stages of bidding for a number of ERDF opportunities and currently in the process of developing a self-delivery model where our experienced advisors will be available to engage with companies through a commercial arrangement.”

Lorraine Holmes, Chief Executive of WMMC, picked up the story: “We are delighted to have John Russell on board. His experience in industrial roles across the world, combined with his spell as Chairman of CBI West Midlands, make him the perfect individual to take us forward.”

In addition to John’s appointment, The West Midlands Manufacturing Consortium also welcomes a number of new members to its board.

Together they will be responsible for strengthening the support given to manufacturers and providing a strong and pro-active voice for manufacturing.