Alan Clawley on the impending closure of Birmingham Central Library in June – but ideas are still being proposed for its future. 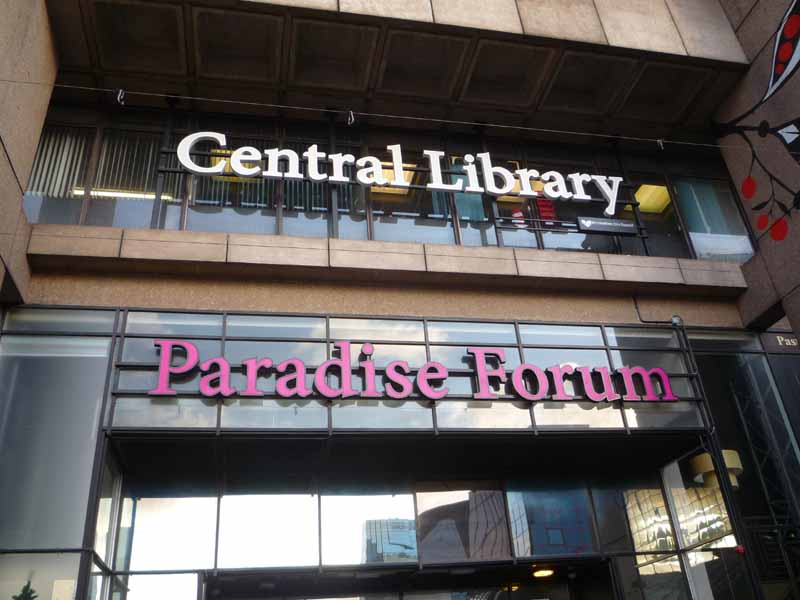 The granting of outline planning permission for the redevelopment of Paradise Circus was expected but it was disappointing that the committee was unanimous in its support for a mediocre commercial scheme that would do nothing to enhance the setting for heritage buildings in the way the city and their partners claimed it would.

The old Birmingham attitude prevailed, perhaps becoming even more entrenched in times of economic stress when the city fathers cling ever more desperately to the hope that any economic progress is better than none.

The library service has already announced that the Central Library will ‘close for good’ in June to enable staff to complete the move to the new library due to open in September. This condemns it to a lingering death. The service has already been emasculated and now it barely survives in its shell of a building where the escalators have stopped running and whole floors are closed.

For forty years the ‘Central Library’ has consisted of a set of buildings with its contents and the means by which the public could come and use them –  the staff, the desks, the study areas, the computers, the catalogues, the heat and light. The various components of a ‘library’ can’t be separated from the building that houses them. When the contents are taken away it is no longer a library. The building is a shell that can be used for something else, if the owner is so minded. But the council has never been willing to accept this concept. They were determined from the start that once the building was no longer a library it was fit for nothing more than demolition.

The story of Madin’s library naturally comes to a close when the last book has been taken away, but while the building remains standing the story of the building itself will continue to be told until the day of its ‘execution’. The council has long decreed that its fate is bound up with that of that of Paradise Circus. That has narrowed down their options and committed them to a massive scheme from start to finish. They have refused to consider a piecemeal approach. But time will tell whether or not they can achieve their goal of comprehensive development based on the Howells master plan. The developers are already phasing the scheme over 15 years, the first being a 23-storey hotel on the site of the Conservatoire. Any plan covering two or more decades is bound to be subject to the vagaries of the economy and the demands of the market. The ‘plan’ for Paradise Circus has already been on the drawing board since 1999. Even the first demolitions, we are told, will not start until 2015 and the first building will not be completed before 2017. The final building on the site is unlikely to be opened before 2030.

What happens to the empty Central Library building after 2013 is therefore another story. I am still very encouraged to receive projects based on the Central Library from architectural students around the country.

The latest, from a student at Cardiff School of Architecture shows how the library could be the home for an English Assembly. Students are of course not held back by worries about finance or politics, but their projects demonstrate graphically how flexible the building must be if it can be used for a completely different purpose from the one intended by its designers.