Labour party councillors and supporters dressed in pyjamas braved the freezing cold and snow to protest against the ‘bedroom tax’ which comes into affect this week. 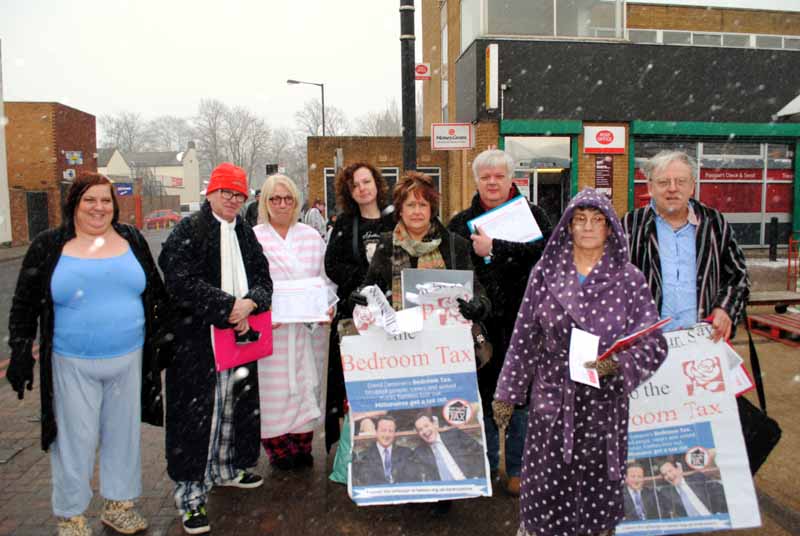 Despite the cold and snow Labour campaigners took to the streets in pyjamas collecting signatures for a petition showing the level of public opposition to the bedroom tax. Bloxwich town centre, 30th March

Over a dozen campaigners met on Bloxwich High Street last Saturday to collect signatures for a petition against the Government’s cuts in housing benefit which will force low paid and unemployed people to pay up to as much as an extra 25% in rent.

Labour councillors and party members from Bloxwich, Blakenall, Leamore and Short Heath were highlighting the plight of over a thousand families in their wards who have unoccupied bedrooms. The protest came as the borough’s biggest social landlord Walsall Housing group failed to give an assurance that tenants who fall into arrears will not be evicted.

Blakenall councillor, Anne Young, said despite the cold and snow the response from the public had been fantastic.“People understand the injustice of this tax coming in, as it does, on the same day as the government are giving thousands of millionaires a tax cut of £100,000 a year.

“Walsall has nearly 4000 households who will be hit by the bedroom tax; over a quarter of whom live in our four wards.  The Tories and Lib Dems’ Bedroom Tax tells you all you need to know about this Government. It’s hitting families of soldiers serving our country who will have to find extra money for their son or daughter’s bedroom.

“It’s making disabled people in council and housing association homes pay more when they need more space due to their disability and divorced parents whose kids come to stay are being affected. Labour are the only political party on Walsall Council fighting this.”

Labour’s Darlaston South councillor, Doug James, said the bedroom tax would lead to evictions. “Officers the 19,000-home Walsall Housing Group, estimated it has 3,476 under-occupiers who will receive a combined £2.4 million reduction in benefit payments if they remain in their homes.

“My enquires to the borough’s biggest social landlord, WHG, failed to obtain an assurance that it won’t evict tenants because of this evil tax. his is not WHG’s fault. When the council’s housing stock was transferred over to it ten years ago, the vast majority of homes were designed for families. It therefore has very little one or two bedroom properties it can move people into.

“The Government is hitting households with the bedroom tax despite admitting there aren’t enough smaller properties for tenants to move to. Instead, the Government expects families to pay extra rather than move house. This won’t solve under occupancy, but will hit low income working families, disabled people, and families of soldiers who are serving their country.

He added: “The situation has been made worse by the fact that at the last full council meeting local Tories and their Lib Dem partners voted down a Labour amendment to increase discretionary housing payments by £600,000 which would have helped families avoid losing their homes.”

Labour councillors will now present the petition at full council on April 8th as part of their continuing campaign for greater help to families.