Birmingham Friends of the Earth are funding High Orchard Community and Balsall Heath is Our Planet to create wildflower havens for local bees in Highbury Park and in the Jubilee Garden in Balsall Heath. 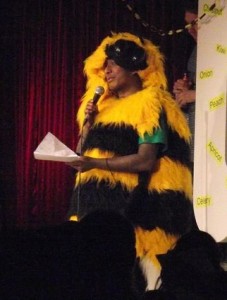 Thanks to the work of the group, a marvelous bee-friendly foraging necklace will be added to part of Highbury Park, and the Jubilee Garden in Balsall Heath will be transformed into a glorious wildflower area of long lasting and beautiful flowers, both areas providing vital food for threatened local pollinating insects.

Shaz Rahman, organiser of the There’s Something Funny in the Honey and Fundraising & Membership Officer at Birmingham Friends of the Earth said: “We are very excited to be able to fund two exciting and innovative projects in our beloved city. The comedy gig was a great success, bringing in new people to the bees campaign and raising a considerable amount of money for these projects. We can’t wait until the summer to see the fruits of our labour in the new bee friendly habitats.”

Liz Wright, Director of Highbury Orchard Community, said: “We are very pleased that Birmingham Friends of the Earth have chosen to fund this fantastic project and hope the whole community will get involved in creating a Foraging Necklace for bees through Highbury Park.”

Richard Beard, Chair of Balsall Heath is Our Planet, said: “Our inner city neighbourhood is short of flowers for bees and other insects. The bee garden will be a jewel, which we believe will intrigue and inspire local residents”

In the 60 years since Queen Elizabeth came to the throne a devastating 97 per cent of our important natural grasslands have been lost. As part of The Bee Cause campaign and to mark the Queen’s Diamond Jubilee, Friends of the Earth has committed to creating 60 bee-friendly patches in towns and rural areas across the UK.