Six Eight Kafé took another step forward in its never ending quest to improve the coffee offerings in the city: by being voted one of the fifty best coffee shops in the U.K. by The Independent. 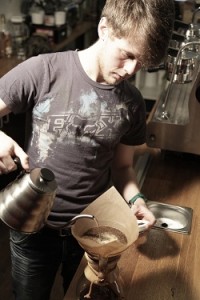 The artisan coffee shop already has become a leader of the blossoming independent coffee scene in the Midlands, but now has firmly put Birmingham on the national coffee map, alongside other notable venues.

“For years Birmingham has been known to be a bit of a wilderness in terms of artisan coffee,” said manager Hannah Smith, “but we wanted change the opinion of people towards Birmingham by heavily investing in our core product: Coffee. We use the one of the most advanced espresso machines in the world and one of the best roasters in the country.”

“We are so proud of the way Six Eight Kafé are flying the flag for independents.” added Kim Stephens of Retail Birmingham. “I’ve watched them grow from a new coffee shop to a true leader in their field, all less than two years”