The original line-up of Steve ‘Big Man’ Clayton & The 44s is getting back together for one night only, to celebrate the twentieth anniversary of the release of their highly acclaimed CD ‘Can’t Stop The Boogie’. 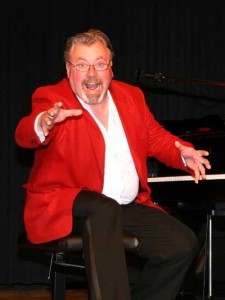 The band are returning to perform at the place where it all started, The Adam & Eve, Bradford Street, Birmingham, on Saturday, February 16th at 9.00pm.

They played a Monday night residency at the Adam & Eve for over two years, performing their brand of piano based blues, boogie-woogie and rock & roll to packed houses every week.

The licensee at the time, Peter O’Neil reflects: “Oh, it was amazing. You couldn’t have paid enough for some of those nights we had, and all that on a Monday night!”.

It’s Peter O’Neil’s daughter who is running the business at the Adam & Eve these days and she is delighted to be having the ‘Big Man’ back. She said: “I’m really looking forward to this, it’s going to bring back a lot of great memories to a lot of people”.

Steve ’Big Man’ Clayton has been living in Germany for the past 15 years but has never forgotten his hometown.

He says: “Once a Brummie always a Brummie. I love coming back home, and this gig will be something very special”.

In addition to the ’Big Man’ at the piano will be the original 44s: Howard Smith on drums, Bob Boucher on bass and Howard Gregory on guitar and violin.

It promises to be one hell of a night.

One thought on “‘Can’t Stop The Boogie’ 20th Anniversary”